Robert Phillips was an African born person arriving in Australia in the 1870’s as a servant of an unknown “English Gentleman” who promptly died, leaving him homeless (It appears) in Gawler, this is possibly when then legend of Black Bobs’ Cave began.

Black Bob as he became known as, possibly used this cave situated on the banks of the South Para river as his refuge from the elements, with its access to year round fresh springs water along the river and fertile pockets of soil, who knows how long he lived there, until he was recruited as the Barnet coachman and assistant to Hannah , an old myth has it when William Barnet snr was living at Bentley farm in the 1870's , Black Bob built a mud adobe across the road in amongst the scrub opposite the driveway, to be on standby as their coachman, (the ruins are gone now) but Black Bobs cave is still etched in the rivers edge, and in many childhood memories, of Gawlerites who explored the rivers and countryside, and read about by the historians amongst us . After Robert Phillips( Bob ) moved out of the cave, stories passed on tell us that a group of Chinese immigrants possibly part of the Barossa goldfields drawcard moved into the area,and began growing vegetables along the river edges, (a ruins of their stone hut and garden terracing still remain) and used the cave as a possible storage cool room against the harsh summer conditions .

A well-known character, spoken of to this day, was Black Bob, Hannah Barnet’s especial guardian, taking charge and acting as nursemaid of the children when the mother's presence was required at the Bunyip office, and who.jealously watched over their welfare. This man was not a member of The Australian blacks but was imported as the servant of some English gentleman who died on reaching Australia and left his servant stranded in this new world. Mrs.' Barnet found that ‘Black Bob’ had an impassioned, longing for music, and he exacted tunes on the piano for the tasks that he performed. It was weird the effect the music had upon him, for as the air progressed he would make fantastic gyrations, never giving in until the music ceased or he pleadingly called upon the player to desist.

You have heard of Black Bob and know his place up the South Para river. He was an African black and. if you- wanted any wood chopped, or knives cleaned,he would be glad to do it for a few pence. He had an old concertina, and many a night he came to our home at midnight and played, disturbing' us in our sleep. Father would have to get up and order him away. At last Bob became so troublesome that he would follow me about. I was afraid to go out alone. He wanted me to go to Africa with him. . Father had to seek protection, Bob was brought before the Magistrate, who ordered his examination by the doctors, and he was sent to the mental home, much to my relief.

Excerpt from Bunyip Friday June 1, 1923 Speaking reminiscently of the early of Gawler, Mrs EM Wilson of Calton Rd said the town need be thankful that it did not now contain two such eccentric characters as ‘Black Bob’ and Cranky Kitty , and The first is still remembered, and his name has been perpetuated by a stretch of the South Para river being called after him. 'Cranky Kitty' belonged to-an' earlier period. 'A freak female, she lived in a dug-out on the river near Willaston, her burrow being infested with a tribe of mangy mongrels Her attire was a shirt, topped by a man's coat and hat, her weapon an axe which earned her sustenance by wood-cutting. A dangerous character, she had to be humoured, and woe betide the one who cast aspersion on her team of dogs.. Another old-time character was ‘Watercress Joe.'

(By Gawler Born.) There's the bridge that swings at Dead Man's Pass, where the river sings and reflects like glass. The gnarled old trees with their twisted knobs, just round the bend by old Black Bob’s, they call and beckon me there. The straggly grey gums at Wire Hole pool, where we swam and lazed in the shade after school. The reeds and rushes of Allan's Duck Flat, And the stretch of gleaming white sand where we sat. I remember and dream I am there. O'er the bare bold hills, near the Bentley home, where the stunted scrub grew, we'd ramble and roam. And chase the rabbits down the long dip, with many a tumble and many a slip, but never a worry or care. There are cruel sharp rocks along the South river , And sheoaks that wail and tremble and quiver, In the windswept gulleys rugged and steep, Where wily black crows are watching the sheep. and bones lay bleached and bare. There's the drab stone house on the dusty plains, the mud and slush from the winter rains. A scorching north wind and heat and the flies, the limestone roads that blind your eyes. With their burning stinging glare. The three score marks now drawing nigh, and the pleasant years are flitting by. But could I live them o'er again, Maybe I'd do as I did then. Of joy I've had my share. ……..E.L.B.P., Croydon. 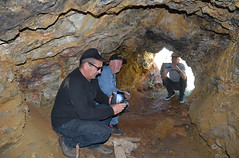 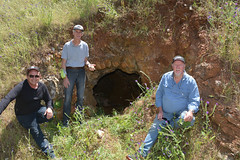 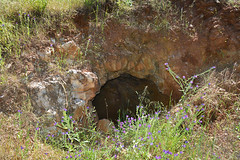 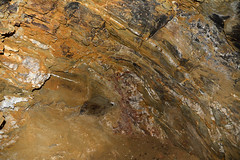 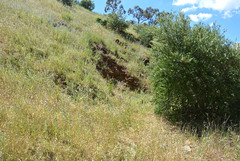 Do you remember Black Bob's cave South Para river ? Then Join up and add your memory here.