The proprietor of the Gawler Cash Stores, is a native of South Australia having been born in Two Wells on March 9, 1870, and the eldest son of the late William and Agnes Crosby nee Burgess, a well-known merchant of this State. He received his education at the Glenelg Grammar School and upon the conclusion of his studies gained an excellent commercial experience in the employ of Matthew Goode & Co., warehousemen of Adelaide. Mr Crosby first opened in business on his own account at Kadina in 1897.

After five years he purchased the general storekeeping business (Pile Building) in Gawler formerly carried on by Mr R J Lavis (now the proprietor of Hooper’s Furniture Warehouse in Hindley Street, Adelaide), and has been prominently identified with the business life of the town.

His fine premises, situated at the business end of Murray Street, consist of a handsome, two-storied, brick building, covering a whole block and occupying a frontage of 87 feet to the street. It is elaborately fitted up with five distinct departments – boots, grocery, drapery, millinery showroom, and a large clothing store, the stock carried in each department being large and thoroughly up to date. The firm is acknowledged to be the principal house of its kind in Gawler and gives employment to twenty hands.

Mr Crosby is also interested in the business of Crosby & Co., merchants and drapers of Gouger Street, Adelaide in which growing centre large business premises were recently acquired (circa 1908).

He has made his influence felt in various ways for the good of the district in which he resides. He is prominent in Literary Society work and is ex-President of the Gawler Institute Societies Union and has been Premier of the Gawler Union Parliament. Mr Crosby is a deacon of the Congregational Church of Gawler; President of “Old School Masters” Literary Society of South Australia; member of the Adelaide Y.M.C.A. interstate debating team (1906); Chairman of Directors of Gawler Implement manufacturing Co; Committeeman of Gawler Agricultural Society; President of various cricket, football and tennis clubs; for several years Secretary of the Holdfast Bay Yacht Club and winner of many races with his yacht “Cooraka” including the 20 guinea Plympton Cup (perpetual) in 1884. A foot runner of merit in his early days he took part in various State events with considerable success.

In 1930 purchased the business of Alfred Sheard thus removing his business from the Pile Building to the Essex House Building in Murray Street, Gawler.

He was first elected to Parliament, a L.C.L. member for Barossa in 1917 serving continually until 1933 and again for 8 years from 1933. He was their Chairman of Committees in the House of Assembly.

In about 1941 his health was failing and in 1947 the business was formed into a Limited Company.

Both Henry and Gertrude are buried in the St Jude’s Anglican Cemetery, Brighton.

Henry Burgess Crosby was elected as Gawler Councillor for North Ward in 1909 for one year. 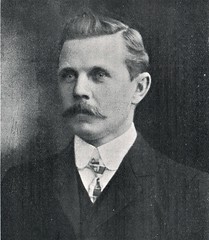 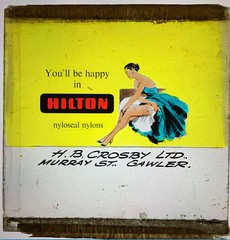 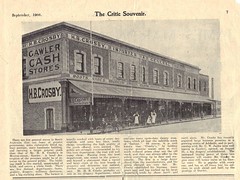 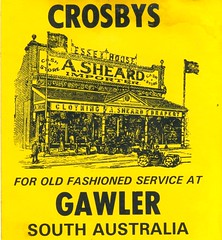 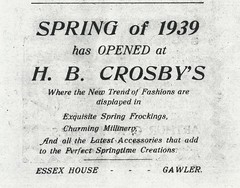 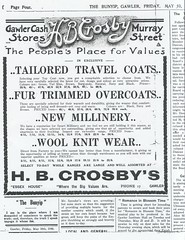 Do you remember Crosby (Cr) Henry Burgess ? Then Join up and add your memory here.