“Bing”, one of many names he was known by, was born 11th May, 1917, at midwife Sister Williams’ nursing home at Kadina. He was the third of 12 children born to Ted and Mabel Crosby, who lived at Alford.

When he was 12 years old, his parents gave him permission to help his Aunt Ella and Uncle Jack Elliot on Harry Hamilton’s farm, eight miles from Cleve. Cyril was required to take young cousin Frank, then seven years old, and Gwen, then five years old, on a horse-drawn buggy for a five mile drive to Yadnarie School. He loved to tease little Gwen, placing her in the nose-bag on the back of the buggy on the way home. They would also let the horse run home and pull the buggy home themselves.

“Bing” left school when he was 14 years old to work on farms doing general chores; returning home to Alford when he was 16 years old. The only employment available to him at the time was cracking stones for road-making at one shilling and sixpence [15c] a square yard. He would accompany his father on droving jobs. He often talked about the time when he walked a 200-head mob of sheep from Tom McKay’s Thurlga Station, many miles north of Port Augusta. With two horses, dogs and a covered van, it took three months droving the mob along the three-chain road down to Kadina at a pace of five miles a day.

Bing was also a talented musician. People always knew he was about when they heard his whistle. He learnt to play the bones and spoons, and sing songs like “It’s a Long Way to Tipperary”, with his father playing his piano-accordion, and his brothers and sisters joining in.

He had a habit of “taking the mickey” out of people. One New Year’s Eve, the neighbour’s outhouse toilet was re-located overnight and Bing also helped to paint a neighbour’s black horse with so many white patches that the owner didn’t recognize it.

Bing was in his early 20’s when World War 2 started. He joined the Citizen’s Military Forces and was then enlisted with the Australian Imperial Forces. He was deployed in the 101st Australian Composite Anti-Aircraft regiment, serving several years as an anti-aircraft gunner on the Liberator bomber; stationed at the airstrip at Fenton, south-west of Darwin.

Post-war, Bing found work at the Berri winery. He then started his life-long job in 1947 with the E&WS Dept at Glossop. It was in Glossop that Bing and Lily Mewett met. Bing and Lily married in St George’s Church, in Gawler on December 18th, 1948. Their first child, Mary Jean was born at the Loxton Hospital before the family relocated to Gawler, where Peter, Faye and Susan were born.

After 32 years of service, Cyril retired from the water-works in 1979. As a pensioner, Bing spent several years as a gate-keeper at the Gawler races and would always place a winner based on the jockey, rather than the horse. He also became a caretaker at St Brigid’s Catholic School.

Bing enjoyed attending Probus and RSL reunions and would march on Anzac Day for his mates.

Married for 63 years and 4 months, Bing will always be remembered for many happy memories by his five siblings, his wife Lily, his four children, eight grand-children and six great-grand-children, and by all those who knew him. 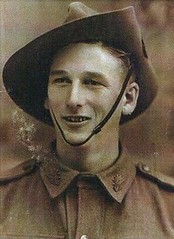 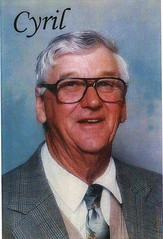 Do you remember Crosby Cyril (Bing) Thomas ? Then Join up and add your memory here.