Regarding the property at 3 First Street, Gawler South

In 1977 my husband and I purchased the property known as ‘Joffrehaig’ at 3 First Street Gawler South and commenced restoration of the old Federation era house. Keen to know more of its story, I began to piece together information in relation to the history of the property. I am currently the president of the ‘Victoriana Society of South Australia’ and was instrumental in the foundation of the Gawler Historical Society.

Through a chance article in the local paper, ‘The Bunyip’, I managed to make contact with the original owner of ‘Joffrehaig’, Mrs Clarice Andrew, at the time residing in Coolangatta Queensland and began correspondence with her. As the letters explain, her parents owned the small cottage at 15 Seventh Street (still extant), purchased from Mr Peak, a sand merchant, and 2 blocks beside for 130 pounds. This is where she was born and grew up. Clarice’s mother, Mrs Joy Henwood, was known as the ‘Grand Old Lady of Gawler’ living until the age of 98. She and her widowed daughter–in–law lived in number 15 until Joy was 92 and then resided at ‘Joffrehaig’ until her 98th year, when Mrs Henwood died. The house built at the beginning of World War 1 when patriotism was at its peak was named by Clarice and her husband after two generals from the war campaign- Joffre and Haig. Designed in the Federation style, which is the first really significant style of Australian architecture, it was considered one of the best houses in the street, Clarice told us. Built by local identity Dick Dawe, the carpentry work was carried out by Walter Ayling of Willaston. Clarice Andrew went on to become a leading milliner in Gawler prior to World War 2 and wrote her memoir of Gawler in the early days of the 20th century. My husband and I carried out extensive repairs and renovations on the property mending where possible the original outbuilding and glass shard walls that still existed from an earlier time. We carefully retained nearly all original features. The house was short listed for ‘Home of the Year’ from around Australia by Home Beautiful magazine in 1988. The dividing tin fence between number 15 Seventh Street and 3 First Street was in existence in 1977 dating presumably from the subdivision of the land by the Henwood family to their daughter Clarice. The rear extension to the house and erection of the carport to compliment the style of the house were both carried out with full Local Council approval and the agreement of neighbours during the late 1970’s. . Along the dividing wall between # 15 and # 3 are significant trees and many shade-giving climbing plant specimens that have been there for over 50 years and not realistically replaced. The garden features the original lay out from 1915 and so has historical significance as a rare surviving example of its type. I would strongly recommend that in order to retain this significance that the layout is not tampered with at all. Further to this, I would suggest that the early boundary lines of Gawler, an important early colonial town, be honoured. There would scarcely be a dividing boundary line in the old settlement that is 100% accurate as the means for gauging this was very limited over 100 years ago. The whole of old Gawler town would be full of such inaccuracies and it is inconceivable that the entire area be re-surveyed with the resultant destruction of significant trees and gardens and formerly approved built structures.

For more photos of the leadlight in 3 First Street please click here. 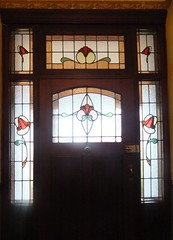 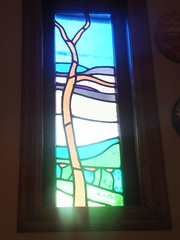 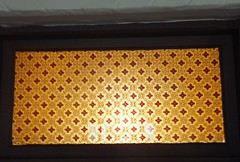 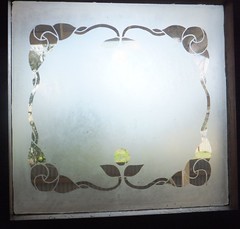 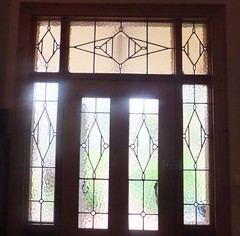 Do you remember First Street 3 Gawler South ? Then Join up and add your memory here.