This former Schoolroom is a double-fronted, late-Victorian symmetrical cottage with a gabled bay addition to the north, set back from the main facade. It is constructed of random coursed sandstone with tuck-pointed red brick dressings. The hipped roof and gable addition are clad with corrugated galvanised iron, with decorative cast-iron lace to the gable. Windows are timber-framed, double-hung sashes and are multipaned to the gable addition. Doors are timber panelled featuring semi-circular arched heads with fanlights. Red brick chimneys with corbelled caps are evident. The bullnose verandahs to the main façade and gable addition are clad with corrugated galvanised iron, and supported on fine timber posts with cast-iron lace frieze and corner brackets. The front boundary is defined by a rubble bluestone wall with moulded red brick coping andpiers with cast iron gate.

Likely constructed as a residence during the late 1870s and extended with a school room in the 1890s, the dwelling at 16 Fourteenth Street is associated with the ongoing residential development of Gawler West during the peak of Gawler’s prosperity, particularly in response to the establishment of nearby industrial businesses such as the Victoria Mill. The school room is a surviving example of one of a number of private school facilities which had operated in Gawler during the nineteenth century; together they demonstrate a common approach to combined residence and school. Constructed of local materials and largely intact, the property has aesthetic merit and displays local design characteristics.

A portion of Section 2, Hundred of Mudla Wirra was laid out as Gawler West in 1857. Fourteenth Street was originally named ‘Express Street’. It is unclear who may have owned the original parcel of land, Allotment 70 of the subdivision, however George Wise, of Gawler, Miller, appears as owner on the first available certificate of title, dated 1878. Wise had resided in Gawler after arriving in South Australia in 1867 and was employed by Messrs. W Duffield & Co. at the Victoria Mill and later at the Adelaide Milling Co.

Miss Florence Nott, the youngest daughter of Dr George Nott (and possibly her older sister Lucy) ran a small private school from her residence at Lot 70 Express Street from approximately 1894 until 1911 or later. There is no mention on the title document of Miss Nott, suggesting that she rented the property from its owners at the time. 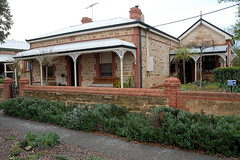 Do you remember Fourteenth Street 16 ? Then Join up and add your memory here.