This entry is for the rear building at 17 Fourth Street Gawler South.

This slate-like bluestone rubble structure with red brick dressings was likely a former blacksmith’s store or workshop. The utilitarian structure features the walling remains of the original building including slotted openings along George Lane and arch headed double door.

The former blacksmith’s shop located to the rear of 27 Fourth Street, Gawler, is indicative of the large number of small-scale but fundamental businesses which had been established throughout Gawler to service the prolific development of the agricultural industry of the surrounding area from the middle of the nineteenth century. Shops such as this are also associated with the growth of Gawler as a service town and stopping point for the passing traveller. The design characteristics of the utilitarian structure demonstrate the simple forms required for such a facility which is constructed of local materials giving a distinctive Gawler aesthetic.

Section 3 of the Gawler Special Survey was originally granted to Henry Dundas Murray and E Moore in 1839. A portion of Section 3, Hundred of Mudla Wirra was laid out as ‘Gawler Town South’ in 1858. This followed completion of the main railway to Gawler and Station, located nearby to the west in 1857. While a largely ‘suburban’ development and character, the division of the town blocks by rear laneways provided opportunities for local businesses and trades to include a functional, accessible arrangement of associated outbuildings.

The original site, including adjoining allotments 86 and 87 extended from (then) Queen Street on the south east side to a rear lane on the north west side. The lane also serviced the rear of properties fronting Adelaide Road. At the time of the first available certificate of title, 1892, the property was owned by Henry Dieckmann, Blacksmith of Gawler. Following his death in 1894 at the age of 28 the property was transferred to his father, Heinrich Dieckmann, Carter of Gawler as executor and his wife, Anna. Heinrich had arrived in Australia from Denmark in 1857 and made his way from Victoria to Gawler where he married Anna Schirmer. Otto Friedrich Dieckmann, Henry’s brother and Gawler Carter was bequeathed the property in 1922. By 1930 the extent of land had been reduced by the sale of allotment 86, limiting the parcel to a single lot. This was subdivided more recently to provide three dwelling allotments. 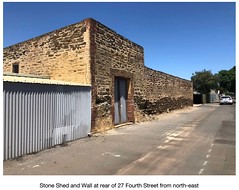 Do you remember Fourth Street 27 ? Then Join up and add your memory here.