This single-storey, double-fronted asymmetrical late-Victorian villa with projecting bay is located on a generous setting. It is constructed of overpainted rubble with overpainted brick dressings and detailing in typical Gawler style. The hipped roof with gabled bay is clad with corrugated metal and features moulded brick detail to the parapeted gable end. Windows are timber-framed, double-hung sashes and are paired to the projecting gable. The façade features a main front door and secondary, half-glazed door to the southern end of the façade. One overpainted chimney with quality detailing is evident. The straight verandah is clad with corrugated galvanised iron on non-original turned timber posts with cast-iron frieze and corner brackets.

Two parapet gabled outbuildings, of face rubble and overpainted rubble, with red brick dressings, corrugated galvanised iron rooves and timber-framed doors and windows, are located to the rear of the property (facing Cross Lane). An early stone wall is evident to the north (side) and east (rear) boundary, with non-original cement block fence to the front boundary.

Believed to be constructed in two main stages between the late 1860s and the turn of the century, the large villa at 30 Fourth Street, Gawler South, together with a complex of stone outbuildings on the rear lane, demonstrates the important phase of strong residential development of the suburban township in response to the increased prosperity and maturation of Gawler in the second half of the nineteenth century. The existence and siting of the rear outbuildings, a stable and workshop, further demonstrate the customary use of horses during this period and the use of such an allotment to accommodate local business and trade. The residence is a fine and largely externally intact example of an earlier cottage adapted and extended to a late-Victorian era villa constructed of local stone, brick and cast iron embellishment. The property was developed by John James Peek, Gawler’s foremost building contractor of the nineteenth century.

A portion of Section 3 of the Hundred of Mudla Wirra, 379 acres originally allocated to Edward Moore in 1839, was surveyed and subdivided for sale as ‘Gawler South’ in 1858. It was offered for sale on 22 March 1858 by Green and Wadham land agents on behalf of the proprietors. This followed completion of the main railway to Gawler and Station to the west in 1857. The original plan of subdivision indicates that Fourth Street was first named ‘Queen Street’. While the area developed with largely ‘suburban’ development and character, the division of the town blocks by rear laneways provided opportunities for local businesses and trades to include a functional, accessible arrangement of associated outbuildings.

Originally held by William Dixon, Allotment 146 was transferred to Bridget Peek, wife of John James Peek, Mason, in 1868. The property was transferred to John James Peek in 1889 and following Peek’s death, to Wilhelm Theodor Dieckmann, also a Gawler South Mason, in 1913. JJ Peek had established himself in Gawler South in 1860 and operated a notable building business in Gawler during the flourishing second half of the nineteenth century. He was contractor on the construction of the Gawler Town Hall in Murray Street (1878) and Gawler Court House in Cowan Street (1881). He also won the contract for the masonry and plastering of the Old Spot Hotel additions in 1880 amongst many other projects.

Around 1927 Part Lot 147 located on the south-western side of the original holding was added to the title held by Wilhelm Dieckmann. 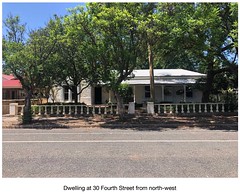 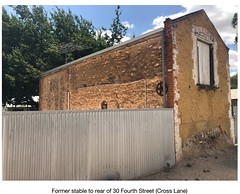 Do you remember Fourth Street 30 ? Then Join up and add your memory here.