This double-fronted Victorian-era cottage is of tooled bluestone construction with red brick quoins and dressings, and rubble side walls. The building has a double transverse gable roof, clad with corrugated metal, with parapeted gable side walls. Windows are timberframed, double-hung sashes with non-original shutters, to either side of a central door with fanlight. Red brick chimneys with corbelled caps crown the parapeted gables. The ogee verandah, clad with corrugated metal, is supported on square timber posts with moulded caps, featuring decorative cast-iron frieze and corner brackets. A non-original cyclone fence defines the front boundary.

Constructed around 1875, the cottage at 37 Fourth Street, Gawler South, is associated with the expansive development of the suburban subdivision of Gawler South in the 1870s as a consequence of the heightened phase of industrial and commercial prosperity of Gawler and its surrounding agricultural districts. The transverse gabled cottage of stone and brick construction with ornate cast iron embellishment is a good and substantially externally intact example of a distinctly local typology, constructed of local materials.

According to a previous study the cottage was constructed prior to 1875. Originally of three rooms, as recorded in the Munno Para East assessment for 1875-76, the owner at the time was George Harnell. The first available certificate of title, dated 1886, indicates that by that time the property had been transferred to George McMillan, Carter. Thereafter it transferred a number of times including to Alfred Holmes, Ironworker in January 1893, Eugenie Adelberta Johanna Holmes, Alfred’s wife in October 1893, Kathleen Gweneth Holmes, Spinster in 1923, Frank Thomas Freeman and Blacksmith in 1952. 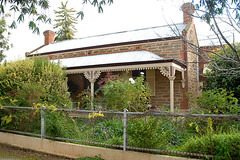 Do you remember Fourth Street 37 ? Then Join up and add your memory here.