This single-storey, double-fronted asymmetrical villa is of quality Victorian construction. It is constructed of dressed bluestone with overpainted brick dressings with a tuck-pointed finish. The transverse gable roof with projecting gable to front is clad with corrugated metal with parapeted gable ends with brick coping, heavy cornice and dentilled hood mould. Windows are timber-framed, double-hung sashes with arched heads and external shutters, and the door is a half-glazed timber panel. Chimneys are of overpainted brick with ornate detailing and dentilled caps. The straight hipped verandah is supported on timber posts with cast-iron lace detailing. A non-original picket fence with woven wire gate define the front boundary.

Constructed during the mid-to-late Victorian era for local blacksmith, Richard Henry Richards, the villa at 38 Fourth Street, Gawler South, is associated with the period of heightened residential growth in Gawler’s suburban townships as a result of the increased levels of manufacturing, industry and service to the amplified agricultural and mining activity of the surrounding regions. Constructed of local stone and brick, with distinctive ‘Gawler’ aesthetic, the villa responds to its corner location with equally detailed dual frontages.

The first available certificate of title, dated 1913, indicates that the owner of Part Allotment 160 at the time was Richard Henry Richards, Blacksmith. He transferred the property to his wife, Annie, in 1930 however following Annie’s death in 1933 the property passed back to Richards and remained in his ownership until his own death in 1948. Richard Richards was Gawler Councillor for South Ward in 1934. 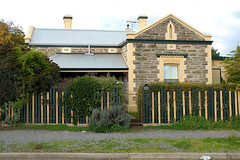 Do you remember Fourth Street 38 ? Then Join up and add your memory here.