This single-storey, double-fronted mid-Victorian symmetrical cottage is constructed of coursed tooled bluestone with red brick quoins and dressings with ruled rubble side walls. The hipped roof is clad with corrugated galvanised iron and features red face brick chimneys with dentilled caps. Windows are timber-framed, double hung sashes to either side of the central timber panelled door with sidelights and fanlight. The concave verandah is clad with corrugated galvanised iron and supported on square timber posts with cast-iron frieze and corner brackets. A non-original picket fence defines the front boundary.

Likely constructed between 1884 and late 1890s for local carpenter Stephen Finch, the cottage at 44 Fourth Street, Gawler West, demonstrates the period of heightened residential growth in Gawler’s suburban townships as a result of the increased levels of manufacturing, industry and service to the amplified agricultural and mining activity of the surrounding regions. Constructed of local stone and brick with cast iron embellishment, the dwelling is a fine and largely intact example of a late-Victorian era cottage.

The original owner of the allotment is unknown. Stephen Finch, Carpenter, was holder of the title in 1890 and owned it until the property was transferred to Edith Luisa Wade, wife of William Wade, in 1912. Stephen Finch had been involved in the local community as Councillor of East Ward until 1903 and teacher at the Tod Street Methodist Sunday School from 1850 until 1903. The cottage is believed to have been constructed between 1884 and 1900, however little else is known due to rate assessment books being unavailable for these dates. 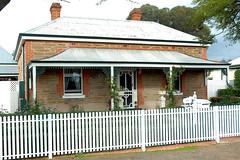 Do you remember Fourth Street 44 ? Then Join up and add your memory here.