The Gawler Club has (temporarily) moved from the Gawler Institute /Town Hall for the first time in its 143 year history , with its major historic asset , the Billiard table given the best of care during its historic move.

The Gawler Club was founded on February 22, 1873 for professional and business men , Mr. Geo Palmer, manager of the Gawler branch of the National Bank was the instigator, and had 34 members at that time.

The Club purchased the full size billiard table 12 foot by 6 foot (model Squatters Favorite) in the early years of the club and was manufactured in Melbourne by Alcock & Co which started business in 1853 by Henry Upton Alcock. Table number is 788 which is one of the lowest on record at Alcock’s.

Alcock had an agent in South Australia at the time the club purchased the table and the agent was Fred Lindrum, the great Walter Lindrums grandfather. The Lindrum story is fascinating and unique over the generations, Fred Lindrum was one of our greatest winemaking pioneers and in 1873 was awarded Australia’s first international gold medal for wine at the London international exhibition of fine arts, which happened to be the same year the Gawler Club was founded. Fred Lindrum became Australia’s first professional billiards champion.

The Gawler Club’s Alcock table is made out of Blackwood and has very rare cushion rails where the timber is fiddleback, which means the timber is cut across the grain and not along the grain. In later years the club purchased a small table so the club could compete against clubs in Adelaide.

The Gawler Club has always been based in the Town Hall / Institute precinct since 1873 until the club temporarily relocated on 16 January 2017 with the council now renovating the two buildings into the our districts spectacular Gawler Civic Centre and will move back to its historic home in the basement of the Town Hall in late 2018 when the project is finished.

The Gawler Club is now presently relocated at the Elderly Centre in Gawler South. In 1985, the Club was shuffled out of the back of the Institute building to the basement of the Town Hall, due to the library expansion into the rooms that had housed the club for many years.

The club will be restoring the tables to their former glory before the club moves back to the town hall in 2018 at a major expense to the club.

How the club was moved: - On Wednesday 11 January 2017 the honor boards, score boards, cue racks etc were removed from the walls for transport. On Sunday 15 January 2017 the boards and all of the clubs belongings were moved to the Elderly Centre. On Monday 16 January 2017 the tables were pulled apart and moved by Cue power billiards. The large table slate is in 4 pieces which makes it easier to move; the small table is one piece and was a challenge to take up the old slate steps in the town hall basement. On Wednesday 25 January the honor boards were placed on the walls. On Thursday 2 February the table lights were moved from the town hall and placed over the tables in the new clubroom. Many thanks to the members involved.

The Gawler Club has had many high profile members over its history, James Martin was an early member, and it has been stated that the town hall would not have been built but for the kind donation of James Martin. Many business owners and professions over the years have been members, too many to mention. Although in the early years only men were able to join and had to own a business or be of professional status. Later years the club was open to any male that was accepted by the club. In 2014 the club accepted the membership of two ladies and the club has also set up a junior development program, many juniors have parents that are members. Junior’s now have tournaments each year and honor boards displayed in the clubroom.

The greatest billiard player ever, Walter Lindrum entertained the Gawler Club members on 22nd December 1926. At that time he held the world’s highest break of 1417 but in 1932 he had an amazing break of 4137 against Joe Davies in London. His record still stands today; in fact they changed the rules to try to stop him. Lindrum has been called the “Bradman of billiards” although there was far greater inequality between Lindrum and his opponents than there was between Bradman and his. Walter Lindrum was recognized as the fastest scorer in the professional ranks. Lindrum was the master of the nursery cannons.

Walter Lindrum gave an exhibition game and a display of fancy shots on the table. To make the exhibition more interesting Mr. F.E. Barkla consented to be his opponent. In an hour Lindrum scored 1125 against Barkla’s 98. Apparently members were amazed at his control of the “ivories “and were astounding as he played with ease that almost reduced the game to an absurdity. The Gawler Club has many historic artifacts , included are a Walter Lindrum 4137 cue and the cue used by Barkla in the match against Lindrum, a very old original Alcock cue. Many original accessories that would have been purchased with the table. Many old bentwood chairs that date back to the 1800’s.

The club holds tournaments each year and the winners and runners up are still placed on the honor boards, one board dates back to the very early 1900’s. It is evident on the tournament boards where years are missing due to the two world wars and depression years. The Gawler Club has been going for over 140 years and will continue for many years to come.

Thank you John Brereton for your account of this historical move.

Extracts from Journals, books and publications pertaining to the Historical Gawler Club established in February 1873 and resided in the basement of the Gawler Institute.

The Gawler Club. A number of Gentlemen of Gawler and its Suburbs have recently formed a private Club and engaged the underground apartments of the Gawler Institute for the accommodation of its members , the club being conducted on the plan of those in Adelaide. Much discontent appears to have arisen on account of the Institute having been allowed to furnish appartments for such purposes. Considered by cautious and reflective people as being at variance with the design of the Literary and Scholastic establishments known as Institutes

Gawler Institute General Half Yearly Meeting Your Committee have, since the completions of the building, been most zealous to find, tenants for the lower rooms, that would enable them to have the rooms plastered, ceiled, and floored. This has now been done in the large room, under the reading-room, and the room adjoining having been finished with doors and fittings complete, at a cost of £67 7s, and let to the Gawler Club, at a yearly rental of £35, payable in advance, the first, year's rent of which has been paid, which terms we consider highly advantageous ; and although rented by a private Club, and in no way connected with the Institute, we are of opinion it will prove a means of providing wholesome recreation to the members of the Club, and be beneficial to the Institute.

The Gawler Club—In common with several other clubs in the colony, the Gawler Club was unsuccessfull in securing a licence from the Adelaide Licensing Bench at its session this week. The licencing of clubs is compulsory under the latest Licensed Victuallers Act.

Extracts from History of Gawler by E.H. Coombe Page 44

The club Quarters are in the Jas. Martin Room of the Insitute

EXTRACT FROM The Gawler Handbook by George Loyau 1880 (page 66)

THE GAWLER CLUB, the location of which is in the underground apartments of the Institute, is well worthy a visit. The first suggestion of starting the Club, which is now looked upon as one of the institutions of the town, was made by Mr. George Palmer, then manager of the National Bank of Crawler. It was founded February 20th, 1873, with 34 members, since increased to 45, and has in every way answered the purpose for which it was intended, that of supplying a place where the young gentlemen of the town could meet for the enjoyment of social pastimes, other than at the hotels. The Club numbers about 50 members, and is represented by the following officers :—President, Mr. F. F. Turner ; Acting Secretary and Treasurer, W .F. Loutit. Committee— Messrs. Ferguson, Popham, M.D., "Wincey, and Roe-diger. Auditors—Messrs. Rudall and Thornley. The rooms are cool and well ventilated and furnished with billiards, chess, cards, and other games. The subscription is £2 2s. per annum. 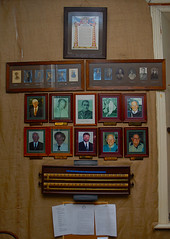 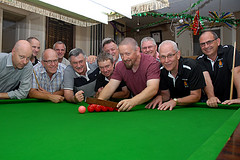 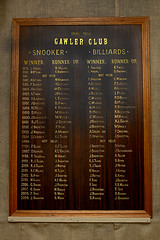 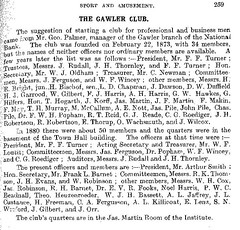 Do you remember Gawler Club Inc ? Then Join up and add your memory here.