1840, 20th February - Sections 16 & 17 purchased by James Ilbery. The property was named Gawler Farm and the llberys constructed a home there.

1842 - James Ilbery jailed for cattle theft and the ownership passed through James wife Henrietta to her sister, Louisa's husband William Younghusband, who lived in Fleetwood in England. Henrietta continued to live there. James Ilbery was indebted to Chariot Sophia Thomas £1726. (Chariot was the mother of Henrietta and Louisa) William Younghusband came to South Australia with his wife Louisa and took up residence with Henrietta. About this time the property became known as Floraville

1844 - Death of William Ilbury aged 6. ( It is believed that he is buried on the property). 1847 - Younghusband brought 1000 bullocks overland from Sydney for copper cartage from Kapunda to Burra. A painting by S T Gill in the SA Art Gallery depicts the preparation for their arrival. The painting dated July 1847 was probably from drawings in February of that year as was another painting of the bullocks at a camp south of Nuriootpa.

1947 - Transferred to Sanderson, Lucas, and Davenport as tenants in common (daughters of Sanderson)

In June 1842, William Younghusband again arrived at Port Adelaide from Singapore . He set about a series of business transactions, some of which included the gradual purchase of several sections of land on the Gawler Special Survey. The building date for Floraville on Section 16 is not positively known, but appears to have occurred about 1845-6. Younghusband died in Rome in 1863. The house was subsequently burnt down possibly about 1864. Sometime later the shingles and most of the stone walls were cannibalized. Remaing materials were pushed off slope into the house cavity. The white but alongside, the North Para River lasted much longer, but eventually its walls were staved in as it went to ruin. A contemporary description of Floraville has been left by 'Old Colonist ‘ during his 1851 visit. This is recorded in the book 'Colonists, Copper & Corn' edited by E.M. Yelland 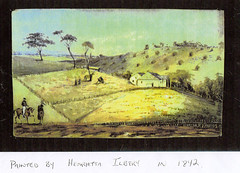 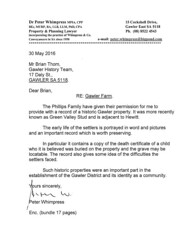 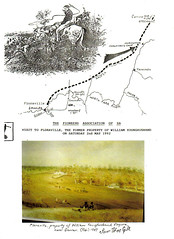 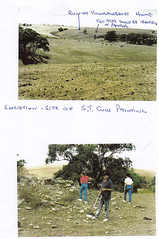 Excerpt of a journey

GAWLER TOWN TO BLAKISTON 26 February—This morning we made an excursion on foot along the North Para, to visit Mr Stephen King, an old colonist, about six miles from Gawler Town.

A letter to Mr John Phillips from

I have a watercolour executed by my great grandmother, Henrietta Ilbery (formerly Thomas), in 1842 of "Floraville'. On a recent visit to Gawler a comparison was made visually from the watercolour showing the fold of the hills and the Adelaide hills beyond in the far distance with the lie of Sections 16 & 17 purchased by my great grandfather, James Ilbery, in 1839. Placing the Hundred of Nuriootpa map against the modern confirmed the suspicion derived by eye that a ruin indicated by a person nearby on Section 16 was indeed "Floraville. Following an unfortunate dispute over the ownership of some cattle James was imprisoned and sometime in 1842/43 the property passed through the hands of Henrietta's sister Charlotte Thomas into the ownership of William Younghusband (married to the eldest Thomas daughter, Louisa), although Henrietta continued to live there. for some years. Following the death of Henrietta my grandfather, Thomas, came into the guardianship of William Younghusband. He was sent to school at Rossal near Fleetwood, in the west of England where there were .Ilbery and Younghusband relatives. Thomas managed "Nocatunga" for the Hughes in the 1870s before settling as an agent in Bourke where he married Mary Horsfall and my father was born. I have gone into some detail to illustrate the importance to our family of finding our point of entry. into Australia from India and China after many attempts over the years and the actual site, I believe, of where they first lived,. I trust that you are as interested in the. beginnings as we are and would Wish to exchange information regarding the history of the, property which you now own.

Thank you for your letter of 6th August and the enclosures.

My wife has an 'original ST Gill of the Underwood family home at Ashfield, NSW (she is a descendant of Joseph Underwood) and it was while looking among the prints in the Mitchell Library to make sure it was listed as in her possession that i came across a copy of ST Gill's "Floraville". I had a photographic print made of it so, although i thank you for your photocopy, mine is of better quality. I make this point because the same unfortunately applies in regard to, the photocopy of my great grandmother's watercolour enclosed for you Despite having several attempts at reproduction the colours are not correct making it garish in comparison with the original. To provide a photographic copy would be quite expensive.. HEI's drawing shows the Adelaide hills in the background between the folding. Countryside behind "Floraville'. Gill’s is from a different perspective, looking Up the hill towards the garden while HEI's shows the house and garden from the side. They certainly chose the site well I also have a similar same Page of "Gawler Town. to Blakiston" although it must be from a different volume as mine from 'Colonists, Copper and Corn in the Colony of South Australia', Hawthorn Press, 1970 is numbered page 170.

Your third enclosure outlining The floraville Estate" in 1890 shows that the Younghusbands, if the property was still in their possession at this time, had increased their 'holding from the Original Sections. 16 & 17 purchased in trust for Henrietta Evelina Ilbery by William Younghusband in 1843.

The watercolour of a well-established house and enclosed garden by HEI was framed in 1842 and Younghusband did not arrive in the colony until that year. The Ilberys must therefore have erected the homestead.

The microfiche "Colonial Residents 1DE-ISL 50/110 Mortiock Library " gives James Ilbery and then Mrs Ilbery as cultivators at North Para from 1841 through to 1e48. On 19th OctOber 1844 it Was reported in the Adelaide newspaper that "On Wednesday last, a most dreadful accident took place in the neighbourhood of (Gawler Farm to a son of Mrs Ilberry, a boy of about six years of age. It appears that the lad was standing near a tree looking at, but unobserved by a man yoking some bullocks. This being done the man started them, when the wheel coming in contact with the boy, crushed him in a most dreadful manner. A medical gentleman was immediately on the spot but without avail as he expired a few days later." Perhaps Gawler Farm was the original name. Our son James and I when in the district this June were unable to locate Wililam's grave.

Thus it appears that James and Henrietta would have erected the first building on "Floraville". One could only be sure of these facts by going to the original titles. The Old Titles Office in Adelaide requires the present owner to give permission to view these historic records and I enclose their form trusting that you will do so to allow James or myself when next in Adelaide to fill gaps in our family history.

Do you remember Gawler Farm ? Then Join up and add your memory here.