W. Hobart & Son was established around 1901. The establishment included a firewood and its delivery business and a produce store which carried feed for all animal stock. The business also comprised a livery and bait stables. The firm also contracted as furniture removalists.

William Hobart Snr was born in Essex and he married Mary who came from Abbotskerswell and they had their son William before they left England and they arrived in SA in January 1854. They went to Alma Plains where they set up farming as well as owning land in Gawler, later, where the old Trotting Track used to be. They then produced 12 more children [one dying young and buried in Pioneer Park]. William Snr took about half of the family to Mambray Creek to do farming and operate the local Post Office. William Jnr ran the Fodder Store at the corner of Tod and Reid Streets. [Thanks to Ray Hobart for this above information]. 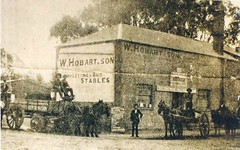 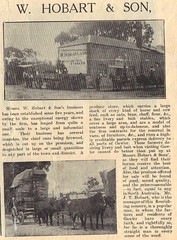 Do you remember Hobart William ? Then Join up and add your memory here.