14 Jerningham Street was one of the first blocks of land laid out in the original survey of Gawler. Marked as Lot 156 on the original plan, the land was first granted to Mr Reid and Mr Murray in 1839. It was soon thereafter conveyed to a group of Gawler’s original investors. The land changed hands numerous times, with notable owners including Edmund William Jerningham, the namesake of the street. It appears unlikely Mr Jerningham would ever have actually seen the land he owned, as he died in Middlesex, England in 1860.

Lot 156 eventually ended up held in trust by the Gawler Permanent Building and Investment Society, with one trustee being James Martin. In 1875, the Society sold the land to Mr Charles Henry Annells.

C. H. Annells was born in North Adelaide in 1852, meaning he was a relatively young man of 23 when he purchased Lot 156 for £250, with a mortgage of £200 to the Gawler Permanent Building and Investment Society. The purchase of the land would have come two years after Mr Annells married his wife Emily (nee Parnell), from Gawler, and would also have coincided with the birth of their first daughter, Mabel Emilie Annells.

Modern records indicate that the home on Jerningham Street is a villa constructed in 1890, however this time frame does not seem consistent with the purchase of the land and the Annells’ family life. Furthermore, the 1883 Gawler city directory lists C. H. Annells, accountant, as living on “Stubbs St” (which was often used interchangeably with Jerningham St at the time). It is theorised therefore that the home may have been built in two parts, beginning with a modest cottage, before adding on the “villa” section in 1890. This may explain the inconsistency between the dates.

In the 1870s and 80s the Annells would go on to have four more children, three daughters and a son. Sadly the son passed away as a small child. Two of the daughters were eventually married, one into the Forgie family, while two remained unmarried.

Throughout his life, C. H. Annells was a well-respected member of the community, being an accountant who served as the Auditor-General for the Town of Gawler and President of the Gawler Literary Societies’ Union. He was also very active in the Lutheran Church, being Superintendent of the Sunday School, and there is a stained glass window dedicated to him in that church.

Charles Henry Annells died in 1915, leaving the home and land to his unmarried daughters but to be held on trust for his wife during her lifetime. Matthew Wilson Forgie, his son-in-law, acted as executor. Emily remained in the home until her own death in 1925. At this time, the daughters assumed ownership of the property.

They would eventually sell the home to James Ireland, farmer, with a mortgage over the property, in 1929. He likely lived there with his wife Ellen (nee Arbon). James and Ellen had ten children, eight of whom survived into adulthood. Although most would have been adults when they moved into Jerningham Street, census records in 1939 indicate that sons Edward, Jack and James also lived at Jerningham Street. Also in 1939, James Ireland and his son Leslie would be charged with defrauding the Farmers Board. Only James was convicted and was fined £5.

Perhaps as a result of James’ indiscretions, he sold the house on Jerningham Street soon after and it was bought by John Smyth-Blood. At the time, John Smyth-Blood was the Postmaster for the town of Gawler. He had originally moved to Gawler after serving as Postmaster at Peterborough, and at first the family had accommodation on-site at the Post Office. Later, they were required to find their own accommodation and did so at what was then 6 Jerningham Street.

Sharing the home with John Smyth-Blood was his wife, Clarrissa Catherine, and his children - two daughters and a son. His daughter Margaret Catherine Smyth-Blood was an accomplished pianist and music teacher. She would often play recitals in Gawler, and taught piano lessons both from the home in Jerningham Street and elsewhere. She eventually moved out of the home after she was married in a ceremony that earned a long feature in The Bunyip.

John Smyth-Blood eventually retired from the post office due to ill-health in 1943, and the property was then sold again in 1950. 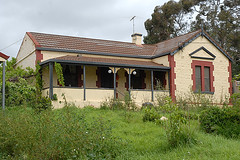 Do you remember Jerningham Street 14 ? Then Join up and add your memory here.