The Oddfellows' Hall, immediately north of the Post Office clock tower was built in 1859 by the Lodge. [It was the first Oddfellows Hall built in South Australia.]

It is one of the oldest original buildings in Murray Street (with only the addition of a 1940-50s concrete slab as a modern facade.)

Loyal Gawler Lodge was formed on 16th May 1846, and held meetings in the Old Spot Hotel until 1852, the Globe Inn until 1856, and thereafter at the Bushman Hotel until their Oddfellows Hall was built.

The Oddfellows Hall was the principal place of public gathering in Gawler until the Institute was built.

The Baptist Church met in these premises prior to their church being built.

The Gawler Institute also used these premises from that time renting the lower rooms and having use of the hall, upstairs, 12 times per year for concerts etc. This was the actual venue for the first public singing of the Song of Australia on December 12 1859.

The Hall was sold to Super Elliott Cycles in June 1972. 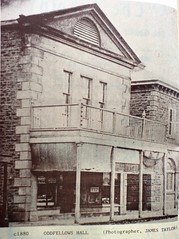 Brian Gordon Thom remembers: In approximately 1955, I can recall going upstairs on Saturday afternoons to the first floor where there were many full-size billiard tables, on which we played billiards or snooker. I cannot recall the name of any Club or business providing the opportunity to play on them.

Do you remember Murray Street 63 Oddfellows Hall ? Then Join up and add your memory here.