Gawler was saddened this week by the news of the death of Mr R Boswell Pearson, affectionately known as “Bossie”.

He died at the Hutchinson Hospital, Gawler, on Wednesday 21 August 1963, after a short illness.

He was well known as a Murray street chemist in Gawler for many years, and before that at Hamley Bridge. Mr R B Pearson purchased the chemist shop from Mr John Letcher in 28 August 1923 (CT 763/163) and from the 19 January 1933 he leased the shop to Laurence Austin Farmborough Payne and from 26 December 1950 to John Davidson Duncan and finally upon his death it was transferred to Olwyn Gertrude Duncan on 23 March 1964.

He was a lover of music and will be missed at the Congregational church, Gawler, where he played the organ. He was unmarried.

He resided at “Hemingby” King Street, Gawler from 1898 until his death except for the years he spent training and at Hamley Bridge.

His funeral will leave the Congregational Church for the Willaston Cemetery after a service at 11 am. 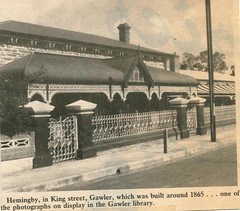 Do you remember Pearson Roy (Bossie) Boswell ? Then Join up and add your memory here.