"My whole career I’ve always been true to my music. My favourite saying by my favourite singer Kurt Cobain once said, ‘They’re laughing at me because I’m different. But I’m laughing at them because they’re the same’."

Gideon was brought up in a small village in North Sumatera where music was always apart of their culture. When he was eleven he moved the to the big city of Bandung, West Java, where he experienced his first taste of 90’s music. "It was at this moment in time when I decided, I was going to learn guitar."

At age 13 he taught himself some chords by watching other musicians, and then came up with the idea of forming his very first band called, "The Brothers." It didn't go very well but, it was a start and they even recorded an original song on a mix tape. In high school he had a teacher recognise his passion for guitar and recommended him for Music College. Money was scarce but one of the professors noticed his natural talent and they worked out a way for him to enter.

"I studied classical music, majoring in classical guitar for four years and despite the discipline of this degree I always had to add my opinions and loved a bit of grunge ...... this formed a bit of disagreement between classmates and myself and many doubted my journey and laughed at my vision." After completing his degree and gaining his Bachelor of Art (music) he moved to Bali, it was here where he worked hard to build his career in music. he started out by simply busking on the streets and then as his talent became recognised, he was then offered to perform in high-end café’s, restaurants, weddings, events and also began teaching. "Four years ago, I met a girl from Australia and even though my career in music was excelling in Bali, I made the choice to take a leap of faith and move my career to Adelaide. Shortly after moving to Australia we got married and moved to Gawler to share my talents and experiences with all of you."

He works part-time at Cibo Gawler as a waiter serving coffees. As O'ne Music he plays lots of gigs around Gawler and the Barossa at such places as Z WINE - Barossa Valley and Wanera Wine Bar & Restaurant.

"Music is art and art can never be defined. I offer now, my passion and love for guitar through gigs and teaching, where I encourage those who are passionate to be themselves." Gideon describes his musical styling as Alternative Folk and loves covering such bands as far afield as Green Day, Pearl Jam, Nirvana and Radiohead, The Beatles, Jack Johnson and Arctic Monkeys to name but a few.

Gawler History Team Inc thanks Daniel James Down (Gawler in Photographs) and the subjects of ‘Humans of Gawler’ for allowing us to preserve their profiles and photographs for future generations of Gawlerites to enjoy. 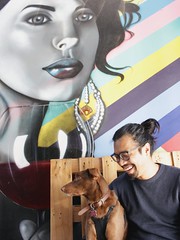 Do you remember Sibarani Gideon ? Then Join up and add your memory here.