Retracing his steps with a walk around Willaston, in “Willaston revisited: January 1988,”Gerald Carmody reminisced about World War II, when he was a young boy – “I turned towards the old Migrant Camp. Here the memories really flooded in. I remembered the dozens of timber and asbestos huts and other buildings erected to accommodate the RAAF during World War II and the roar of the Kitty Hawk and Spitfire planes as they passed over our house in the middle of the night, on their way to the Aerodrome”. This region must have been a very busy area during the war. There was a United States Army Camp at Sandy Creek, housing up to as many as 10,000 servicemen over the time, and with dances being held 7 days a week in Gawler! The camp was located about 1 kilometre from the Sandy Creek Hotel. In 1944 the camp was used to hold Italian prisoners of war captured in North Africa.

During the war there was an RAAF communications section at Willaston that worked underground. Originally called the Adelaide Wireless Transmitting Station, the unit was later re-named the Gawler Telecommunications Unit. It was operated by women members of the Air Force (WAAAF’s) around the clock, with three eight hour shifts per day, from 1940 until May 1946. There were 135 WAAAF’s at Willaston during World War II. The underground operations room had 27 steps leading down to the entrance doors. It was 136 feet long, 30 feet wide and 20 feet high.

The RAAF Gawler Base at Willaston was established in 1942. It was an extension of the RAAF Mallala station which was then the largest air force base in South Australia. A United States Engineering Unit provided specialist knowledge and equipment to seal the runways and assisted in erecting the hangers and buildings. The design brief was for an all weather aerodrome capable of lasting for 3 years. Some 70 years later parts of the airfield are still operational. According to RAAF history, it is known that United States B-24 Liberators, B-29 Superfortresses and at least one RAAF Lancaster had flown in and out of Willaston base during the war years.

Near the airfield, accommodation and administration huts were built. They were dismantled in 1960. This is the area now occupied by the Willaston Oval and 608 Squadron Australian Air Force Cadets (AAFC).

<click here> to view photos of RAAF in Willaston. 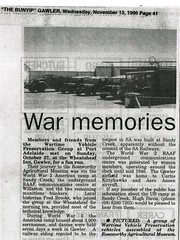 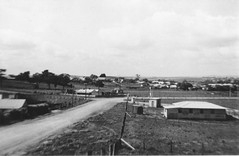 Do you remember Willaston - World War II ? Then Join up and add your memory here.