The hotel now known as “The Willaston Hotel” was originally called “The Victoria Hotel”. It was built in 1866 by T. Scown and had a number of smaller businesses attached to it. In 1958 it changed its name to the Willaston Hotel, as it is known today.

The Grand Order of Oddfellows opened the Loyal Victoria Lodge at its meeting in the Victoria Hotel on 26th March 1867.

Mr. Fred Brooks recollects on the businesses he knew of in the row of shops that ran along the side of the hotel -

“In the 1920s the first one by the hotel was occupied by Mr. Cossey, a sign writer. The large doors at the rear opened up to allow the butchers and bakers carts, etc. to be brought in for Mr. Cossey to work on. In the 1930s to 1960s this shop served as the Willaston Football clubrooms. At times, a few of the homeless would sleep there. Later, Mr. Don Hughes opened a second hand shop, followed by Mr. Neville Chammen . Next, R&H Johnson traded as a second hand dealer and also repaired tarpaulins. In 1988 the north wall of this shop was partly demolished and a doorway built in and the area was made into a darts and poolroom.

The second shop was used by Mr. Hogben as a storeroom for bulk groceries. For a short time it was used as a dry cleaning business operated by Mr. Raymond. It is best known as Turner’s Butcher Shop, operating from 1948 until 1992. The third shop along was used by Mr. Jack Fowler who baked pies and pasties and also sold drinks and lollies. Mr. Alf Keith did shoe repairs and leather work, before moving next to the Willaston Post Office and General Store. During World War II Mr. J. Selway opened a butcher’s shop, closing in 1945. It also operated as a fruit and vegetable shop run by Laurie and Bob Lally from 1945 until 1973.

The end shop was a greengrocers shop run by Mr.M. Ward, until 1903. He then moved next to the post office, before moving across the road to run what the Willaston locals knew as “Ward’s shop”. After Ward moved, the shop continued as a greengrocer, run by Mr. Dick Turner. It is reported that two of his children were born there. The shop was used as a grocer shop by different traders until 1971. Mr. Barry Lewis sold copper ware, then R&H Johnson moved from the first shop into this shop, trading as Willaston Harness & Saddlery. They closed down in 1990.”

A story is told about a glass-fronted call box that used to be in the vicinity of the Willaston Hotel. It was connected directly to the Gawler Police Station. This was before telephones were in general use. In an emergency, the caller would rapidly turn a handle and the Police Sergeant would proceed with all haste to Willaston on his bicycle. Many false alarms were raised on dark nights by local larrikins (as remembered by Gerald Carmody).

Willaston Hotel is contained within the Town of Gawler's Local Heritage list.

Please click here to view many photos relating to the Willaston Hotel.

The Willaston Hotel are valued sponsors of the Gawler History Team. Their contribution helps to ensure the upkeep of this website. Thank you. 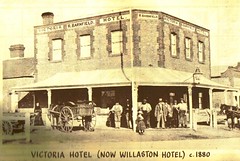 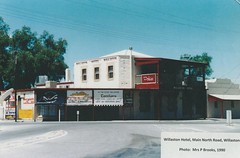 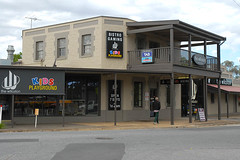 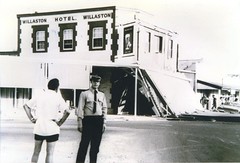 Do you remember Main North Road 33 Willaston Hotel ? Then Join up and add your memory here.