The Willaston store was situated near the bridge on the eastern side. Mr. Willington was the proprietor. The Willaston Post Office was opened on 1st November 1864 operated by Mr. J. Harris who also ran the general store in this same building. In this era, there were 3 mail deliveries to and from Gawler on a daily basis. The business was then run by Mr. Thomas Henwood and Mr. T. Coombe for 10 years. In November 1875 Mr. T. and Mr. E. Coombe commenced as storekeepers and postmasters. They also manufactured confectionary, supplying Gawler, Angaston, Kapunda and surrounding districts.

Mr. E. Coombe’s son, Mr. Ephraim Henry Coombe, left the store where he was a grocery assistant, to become a journalist, and in 1890 became an editor of The Bunyip newspaper. He later succeeded Sir John Downer in the House of Assembly for the seat of Barossa in June 1901. Some years later he joined the United Labor Party, led the party ticket for Barossa, and in 1915 re-entered the House of Assembly. During World War I, he spoke out against the closures of German schools and also led public campaigns against conscription and the intimidation of male voters in the conscription referendum of 1917. He was prosecuted under the War Precautions Act at Tanunda, fined £10, and bound over to keep the peace. He did not oppose the war – he had three sons in the forces. One son died in action in France and one son was injured twice at Gallipoli. Several commentators believe that his “incessant persecution" led to his early death in 1917 of a cerebral haemorrhage. He is buried in the Willaston cemetery.

On the 2nd March 1930, a memorial was unveiled to Ephriam Henry Coombe in the main street of Tanunda. In part, the plaque states – “He saw his duty and did it nobly. We crowned him in 1901 and all that is evil crucified him in 1917 but truth prevailed and he died as he lived an honourable man. Great in his hour of success but greater when bitterly persecuted for holding a principle on which our great free Nation is built.” The town of Coombe, 190 kilometres south-east of Adelaide, just off the Dukes Highway, is named after him.

The business stayed in the Coombe family for 60 years, until 1934, when it was sold to Mr. Evan Morgan for, what the Bunyip reported at the time, as the large sum of £400.0.0. His daughter Betty and her husband Allan Mewett then took over and ran the business from 1958 to 1985. Writing in a U3A Anthology, Betty recalls – “We delivered to nearly every home in Willaston as very few people had motor vehicles. We firstly rode a bike around in the mornings to collect individual orders, writing down the customer’s name and foods required in a docket book which had carbon paper between the pages to duplicate the order. The top copy was given to the customer and the duplicate left in the book for the business records. We returned to the shop and put each order together, all of which was then packed in wooden boxes. On the round, we put each into a cane basket and delivered it to the customer, then unpacked and checked everything on their kitchen table or cupboard. It was often 9 o’clock at night before we finished”. (As found in “Glimpses of Gawler and District”).The business was then purchased by the Armstrong family.

In the book “Significant Women of Gawler”- acknowledging the contributions of women to the Gawler Community, Bob Symes, writing about his mother, Ellen(Nelly) Katherine Symes (1899-1962), and their family life on Redbanks Road Willaston, recounts – “Nelly walked to the shops at Willaston regularly. Spencer Turner’s Meat Store, Hogben’s Hardware, Laurie Lally’s Fruit and Veg and Deli and Morgan’s Post Office catered for her needs. Her small icebox held her daily perishables and bread was delivered daily in the baker’s van.” 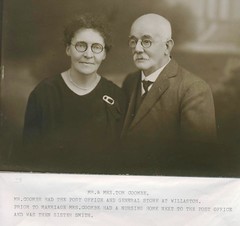 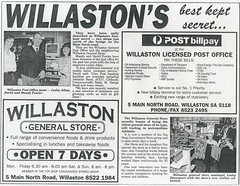 Do you remember Main Street 5 Willaston Post Office and General Store ? Then Join up and add your memory here.