The hipped roof is concealed by the front parapet which features a pediment detail and rendered cornice mould.

The shopfront features an early timber-framed display window with carved stall boards and a non-original half glazed door.

The concave verandah is clad with corrugated metal, supported on square timber posts with cast iron brackets, and is partially enclosed to the south-west.

Likely constructed during the 1870s, the former store at 38a Adelaide Road, Gawler South is associated with the mid-to-late nineteenth century era of the commercial development of Gawler South demonstrated by the store’s location on Adelaide Road, the main thoroughfare between Adelaide and Gawler as well as the Railway Station and Gawler.

The 1870s saw substantial growth in Gawler’s surrounding subdivisions based on the large growth in industry and service to the agricultural development of the northern regions.

John Mitchell was a prominent local merchant and businessman, operating in Gawler for almost thirty years. Subsequent ownership by men in trades such as mason and butcher indicate the a large essence of the Gawler population into the twentieth century.

As well as the residences being established along the major roadway, a number of supporting business premises were established to service the local population and industry growth during the last two decades of the nineteenth century.

Historic lands titles indicate that Allotment 72 and 73 of Section 3, Gawler South, were part of a larger landholding first purchased by Benjamin Edward Deland, later Mayor of Gawler from 1885-86. In 1876 Gawler Merchant, John Mitchell, purchased the two lots from Deland.

Mitchell had also purchased the neighbouring Lot 71 in 1872. A Scottish migrant, Mitchell had arrived in Gawler in 1858 where he commenced working for Walter Duffield, eventually becoming a partner. John Mitchell then commenced his own business, Mitchell, Fox and Co. as a wheat buyer. It is possible that the shop was constructed during this phase. Mitchell was also a prominent local citizen; from 1861 until 1865 he was Honorary Secretary and then President of the Gawler Institute and as a Councillor, becoming Mayor in 1866.

After Mitchell’s death in 1884, the property was transferred in August 1886 to Henry William Ayling, Mason, of Willaston. Ayling was a son of Charles Ayling, who settled in the district in 1856 and went on to be Clerk of Works for the District Council of Mudla Wirra South and Munno Para East and Gawler South.

In 1896 the place was transferred to Hartley Burfield Miller, of Gawler, Butcher and soon after the two allotments were subdivided with Miller retaining Lot 73. Following Miller’s death in 1941 the property was taken over by Clifford Miller.

Please <click here> to view photos of 38a Adelaide Road. 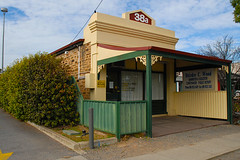 Memories of Adelaide Road 38a

Do you remember Adelaide Road 38a ? Then Join up and add your memory here.