Ted was born in Port Adelaide on 20th May 1889. His mother, Mary Ann Gill, was the daughter of Irish immigrants and his father Edward Allwood was a ship’s cook from Jamaica. After he finished his schooling at Marist Brothers Alberton, he completed an apprenticeship in cabinet making, and went to work at Holden’s Bodyworks.

He was always keen on sport, an excellent oarsman, boxer, gymnast, a handy footballer and a reasonable cricketer but it was a bike training ride which brought him to Gawler. , In 1909 he and a couple of mates rode up from the Port to the Gawler Show. There was a lot of road construction going on in the district, and Ted got a job, returned home to his mother to collect his clothes, then it was off to Gawler until his death in 1982.

In 1913 he married Hilda “Tottie” Jacobs, a member of a longstanding Gawler family which had settled in Gawler in the 1840s.

In time they had five children, Frank, Joan who died in infancy, Reg, Phil, and Janet.,

and he was also a professional boxer, fighting in tents around the local shows. He had his last fight at the Tanunda townhall in 1931 at the age of 42. After labouring jobs including May Bros.,

Ted finally set himself up in business, doing welding and mechanical repairs,. He rented garage premises opposite the Post Office, and started up his taxi service. Later he moved to the corner of Murray Street and Calton Road, next to the Old Spot Hotel, then obtained the mail contract which he held for 40 years.

Of course, most Gawlerites will remember him for his driving – those dozens of children being driven to school, expectant mothers driven up the hill to the “Hutch” and many an elderly lady taken to the shops – generally at a “two bob” fare. Many of his passengers would have a story to tell. I recall him reminiscing about the time his car broke down outside the police barracks at Thebarton. The young policemen pushed the vehicle into the stables until he was able to come back with his tools to get it started. He returned two weeks later, and after he got it going, he thanked the police for their help and with a wry grin of relief, drove his unregistered car home.

And then there was the time he stopped to pick up a hitchhiker who produced a knife, pushed Ted from the car and took off down the road. Ted flagged down a truck, got in and they took off after the stolen car. Ted got his vehicle back and the police got the culprit.

Some time ago I remarked to my sister Phillipa that it would be nice if the older residents of Gawler didn’t think of our Grandfather as just a terrible driver – he was much more than that – a great mechanic, sportsman, entertainer and humanitarian. I remember as a kid I asked what he would like on his headstone – his wishes never came to pass, so perhaps I can bestow it now –

A Party for Gawler’s best-known senior citizen and the whole towns invited was the headline on page three of the “Bunyip” on May 9, 1979. Australia’s oldest licensed Royal Mail carrier, Mr E P (Ted) Allwood, will be 90 on May 20. A lengthy article followed on some of Ted’s achievements. On May 15, page one, article titled ‘Allwood birthday specials!’

Finally, the “Bunyip” reported on May 24 with headline ‘Two-Bob Teddy gets rousing 90th birthday cheer’.

More than 300 people gathered in front of Gawler town hall on Thursday night last week to honour Mr E P (Teddy) Allwood in a unique ceremony. Life membership of 15 Gawler organisers was deferred on Teddy by the Mayor, Mr Gil Harnett, and honorary membership of five other bodies.

“For and on behalf of the Town and community, Gil Harnett, Mayor.”

Reported in the “Bunyip” 0n 15 April 1982 in a letter to the editor H Van der Hoek wrote – It was with deep regret to learn of the passing of Teddy Allwood recently. As a former resident of Gawler having been raised at the Blocks, I can remember on many visits to Murray Street having seen this grand man driving his unofficial taxi in and around Gawler. One only has to mention Gawler in conversation and the name Ted Allwood appears as this man is indeed synonymous with Gawler. For a man to have carried on in so many various vocations at his late age, many voluntary, commands respect. I am proud to say that in my childhood days I had the pleasure of traveling in this unofficial taxi that Teddy operated. 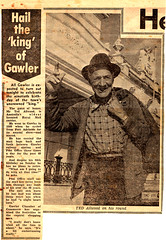 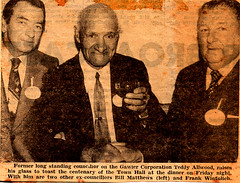 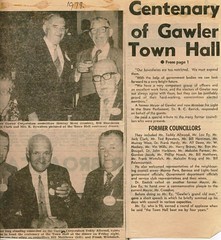 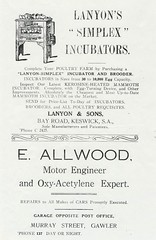 Teddy lived in Ninth Street Gawler South and was the town’s taxi for everyone, especially getting children to and from school. Everyone knew to keep well away from Teddy on the road, as he thought he had right of way no matter where he was. He was a town icon.

Do you remember Allwood (Cr) Edward (Teddy) Phillip ? Then Join up and add your memory here.