David Arandle is a South Australian Artist, Graphic/Web Designer, Writer, Animator and online Video Creator working under the pseudonym 'The Extraordinary Tourist' or 'TET' for short. He is self employed in his own business, Art Time Productions. (www.arttimeproductions.com)

Born in Whyalla, South Australia, in 1970, David moved to Perth, Western Australia, when his family relocated in 1978. In 1994 he graduated with a Diploma of Arts (Graphic Design) from the Western Australian School of Art and Design and established Art Time Productions in 1997.

In 2000 he returned to South Australia after meeting his partner, Kathy, over the internet - moving to Gawler, where she resided.

Shortly after moving he became one of the founding members of ArtsAction Gawler Inc. A community arts and craft organisation set up to establish a Community Art Gallery within the township. Initially establishing a website for the group he took up the role of Secretary in 2001 until the group was dissolved, after having secured a gallery site, in 2005.

Through ArtsAction David helped establish and co-ordinate the Gawler Art Award, a biennial Competition, with the Town of Gawler as the major prize sponsor, that promotes arts of all skill levels and is open to artists state wide.

After completing studies at Murray TAFE for his certificate III and IV in Community Services (Youth Work) and assisting with Gawler's Youth Advisory Committee, David was elected Chairperson of the Gawler Youth workers Network in 2004-2005.

In an effort to keep ArtsAction's push for a community gallery progressing with the Gawler Town Council David nominated for a position on Council as an Area Councillor and was elected unopposed in 2003. As part of that role he became a member of The Gawler High School Parent's Council and The Gawler Community House Board. He remained on council for one term until 2006.

In 2010 David hosted his first solo exhibition of his art at the Gawler Community Gallery during the South Australian Living Artists festival of that year. Works featured the whimsical acrylic cat paintings that he has become known for along with a selection of other fun character artworks.

David's art, writing, animation and videos are featured on his website at www.extraordinarytourist.com 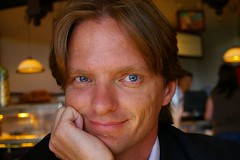 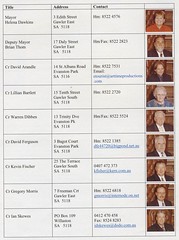 Town of Gawler Council 2006 May to Nov 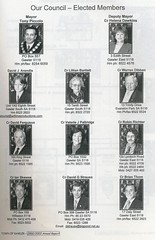 Do you remember Arandle (Cr) David ? Then Join up and add your memory here.