Mark Boon has had a varied life, which led to him making a major contribution to the Gawler Institute Library, with his infatuation with all things printed resulting in the valuable cataloguing of books in the local depository.

In an amazing set of coincidence and choice of jobs and hobbies, Mr Boon found himself spending lunchtimes and after work hours sitting at the big wooden table in the reading room, completing the monumental task of cataloguing the special collection of rare and first edition books in the mid-1980s.

“It was while I was working at the Bunyip, and boarding with Hilda Heinrich, who was the librarian, and because of my love of books,” Mr Boon said.

“Originally it started out as a bit of a hobby but became a passion.

“I had separated from my first wife Barbara and was living in Hilda's house, where she rented me a room, and we must have talked about the library's cataloguing problem.

“I used to pop down at lunch times to see Hilda, as I was at a loose end, and spent a lot of time at the library – although most of her friends regarded her as 'mad as a hatter!'

“Because we both were fascinated with books, I saw a need for cataloguing at the library, which was probably why I began the project – Hilda was the spark.”

Born and raised in England, Mark went to boarding school through World War II, as both his parents were in the forces, his father in the army and mother in the navy.

And at 11-years of age, a young Mr Boon decided to write his first play, which resulted in an experience that firstly 'swore him off' writing, but became a catalyst for his later careers.

He hand wrote his draft in long hand and had it typed out, and was trying to get 20 copies produced from the local newspaper – no photocopying in those days.

“Someone from the local paper liked what I wrote and told the school, which paid for the copies to be printed and allowed me to put on the play – sight unseen,” Mark said.

“And on the opening night we didn't make it to the second act, as the school authorities shut it down and sent all the boys to bed without supper, and sent me down to the basement, reinforced with steel pillars to help withstand the bombing threat – even in Gloucester.

“Down came the matron, a Miss Sibley, who told me to go to one of the pillars, hold on and bend over. I got six of the best from a size 15 tennis shoe – whack, whack.

“They thought the play was disgusting, and it probably was. It was rude, by schoolboy standards.

“In the first act, the boys had to pull their pants down to have a competition to see who had the most to brag about – all the other boys thought it was wonderful, even the boy who was the obvious loser!”

After that experience Mr Boon swore off ever writing another play, but eventually got “back on his bike” and wrote 16 more in Australia, mainly for Gawler Centre Players and the Two Wells Melodrama group.

Mark's father was a journalist, who was a speech-writer for deputy Prime Minister Herbert Morrison, while his mother was an official war artist – so there were obvious good genes in the family.

And for his first job, while in England, Mr Boon worked for the Expert Engraving Company in Piccadilly, which was a business surrounded by little brothels.

“I was fascinated by books, because I had helped put the plates together, and loved looking at them.

“Then I came to Australia and my first job was with Adelaide Art Engravers on North Terrace, where we did work for the Adelaide News, which wasn't as high quality as my previous job.

“After about 18 months I ended up shifting to Elizabeth and became involved in the local community, through the Church of England and Elizabeth Rugby Club, in 1957, when everything was new there.

“I liked to say I was the first 'hooker' in Elizabeth, which was the position I played, and it was tough in those early days, as our pitch had thistles three feet high.

“First I started putting out a club magazine, the 'Thistle Park Gazette', and then contributed articles to the Salisbury & Elizabeth Times, which was owned by The Bunyip's Ken Barnet, who offered me a job when I moved into the area.”

Over the next 40 odd years, Mr Boon was a fixture at The Bunyip, where his love of Gawler and its people became legendary.

He also joined the Citizen Military Forces, where he eventually became a sergeant, and clerk, which added to skills that helped in his cataloguing. This also earned him some extra cash, which financed another love, motorbikes, and competing in the 24-hour enduro.

And with Mr Boon's play writing skills, journalistic work, army discipline, love of printing and books, and friendship with Hilda Heinrich, the formula for his contribution to the Gawler Institute Library's cataloguing was complete.

“I've always been interested in books, not just reading them, but in how they were put together and published,” Mark said.

“Cataloguing was a form of escapism for me – who was the author, where was the book printed, when, and by who? It was just a magical time for me, where I became absorbed with what I was doing, and loved finishing each one and looked forward to the next.

“That big wooden table was my second home, I sat in the same spot always, and everything I needed was there, the books, the stickers, my pens and pencils, an exercise book, it was truly a great time of my life.

“I remember Hilda Heinrich; I remember Helen Hennessy; I remember Wendy Treloar; then there was Jock Chambers, whose books came to the library from TAFE – he had some pretty special books, like first editions, which were collector items.”

Mark wrote an index for Gawler's “bible”, its 1908 history by E.H. Coombe, and helped edit Derek Whitelock's 1989 edition, while his wife Kay wrote the index.

And even today, Mark is busy cataloguing at home, where he is currently going through his 4000-plus books.

It is with great sadness to learn that Mark Boon passed away on Monday 11th September 2017 while on holidays. 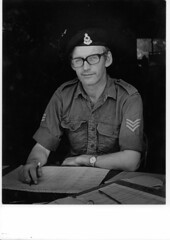 Do you remember Boon (Cr) Mark Henry Xavier ? Then Join up and add your memory here.