Harry Brown was a local builder and President of Gawler Apex Club in 1969/70.

A brief life story written at the age of 84 years.

I was christened as Henry Joseph Brown, named after my father, but we were both called Harry. I was born in Mrs Green’s nursing home on June 30th 1935, so also was dad, on June 26th 1910. It is in King Street and it seems that it was very popular in those days.

My mother [Lydia May Brown (nee. Fry)] came from up north. She was born on the 8th of May 1910 in a bag tent, in a timber cutting camp, at Warioota Creek. Warioota Creek is near Leigh Creek and it is a desolate spot. My wife Ruth & I drove out there in 1997 and met the station owner Richie Ragless. He took me to the site and I could recognise it from a couple of photos that I have. Her father owned a dray, drawn by bullocks. He carted Redgum sleepers to the rail head of the line being built between Adelaide and Perth. I still wonder at the strength & durability of those people; they were certainly pioneers in the true sense.

On my father’s side, my grandfather was Walter Fredrick Brown and my grandmother was Mary Ann Carmody; both of Willaston. They are buried in the Willaston Cemetery. On my mother’s side, my grandfather was Walter Jonas Joshua Fry and my grandmother was Anna Johanna Christine Bowman; both from around the Port Augusta area. They are buried in the Port Pirie Cemetery.

Both of my parents were the youngest of 12 children and because of that, my grandparents were dead before I was born. I did have a lot of aunts and uncles and cousins and I met most of them.

After a short stint in Willaston, and year or so at Williamstown, we settled in a cottage in Thompson’s Row. The cottages were in Gawler East, on the corner of Carlton road & Daly Street, and they were demolished (I think around the late 60’s or early 70’s). I lived there until I was married in 1956. Thompson’s Row was built by the Thompsons who owned the Foundry in King street; built to house their workers. Thompson’s house was further north along Daly street.

I attended the Gawler Catholic Primary School, Thebarton Technical High School, and then served an apprenticeship in Carpentry & Joinery. After completing the apprenticeship, I worked around on various building sites and projects as a carpenter, and then as a subcontract carpenter. Ruth & I were engaged in 1954, and soon after that we were given a block of land by my parents. It was at 4 Mount Terrace, Gawler South. During the next couple of years we built a garage, set it up as a dwelling, and had it ready to move into after we were married.

We were married in the Catholic Church at Gawler on the 8th of September 1956. Paul Brown was born on the 17th of December 1958 and we were still living in the garage. Robert Brown was born on 24th of June 1960, and by that time we had substantially completed our house and so we had moved in. Karen Brown was born on 1st of May 1962. These were all grand occasions and we were a very happy and complete family. The years that we had raising our children and growing up ourselves were wonderfully happy and we often look back and enjoy reflecting on that time. We had accepted clear lines of responsibility. It was my job to support the family and Ruth was happy in the role of stay-at-home mother. It suited us both.

After the children were off of Ruth’s hands, she started her second life. It started with time- step- tappers, and it has arrived at Bangers and Mash. Ruth is fortunate to have joined up with some like-minded people who enjoy playing music & singing. They are a professional group of amateurs who entertain at nursing homes and for other groups. They are very much in demand. Life has its ups and downs, and sometimes the downs are very challenging. In the year 2000, Robert died a few months before his 40th birthday, and in 2015, Karen died soon after she turned 52. These were awful times and don’t bear discussion. However, we have been blessed with 6 grandchildren and 3 great-grandchildren. We are so happy to have them.

I spoke earlier about school and my apprenticeship but there was a lot more to life than that. I always had a love of sport. I played football and cricket in team sport and I enjoyed weekend tennis with mates. I played cricket for Salisbury cricket club as a wicketkeeper/batsman and, later, for Willaston as a batsman. I played football for Willaston and even had a run with North Adelaide. Unfortunately, a serious motorbike accident at the age of 20, resulting in a smashed left elbow, ruined any chance of playing at the higher level. I took up golf at the age of 28. I loved the game but I couldn’t get my handicap below 10; what can I say?

In 1961 a number of things happened. I nominated as a councillor for the Gawler South ward for the Gawler Council elections. It was a contest between me and the sitting member, Laurie Hallam. I was successful and served on the Council for 2 terms. Soon after becoming a Councillor, I joined the Gawler Apex Club, and then, shortly after, Gawler Carpenters and Joiners was born. The birth of the partnership coincided with the end of my football career with the Willaston Football Club. I was the secretary, treasurer, vice-captain and selector at the time.

Ruth and I established the partnership of Gawler Carpenters and Joiners in 1962. Colin Pike drew up the partnership agreement. By then I was sub-contracting as a Carpenter to major Adelaide builders, as well as building extensions and doing general building work in Gawler. As the workload grew, it became necessary to convert the partnership into a company and the original shareholders were Ruth and me in equal shares. This was done in 1979. The Company has both prospered and struggled in the 57 years since its start.

My son Paul Brown took over when I retired in the year 2000. He had been Manager for at least 6 years prior to that time. Just this year Paul appointed Reece Brown, his son, as Manager. I suspect that Paul will retire when he reaches 65, leaving it to the 3rd generation to continue. Under Paul’s leadership the company changed its name to GC&J Constructions, the new name reflecting more correctly what we really did.

In the days when I was subcontracting, I developed good relations with a number of Architects who offered me the opportunity to tender for the work that they were doing. I took up these offers and we were soon building extensions to Hotels, Banks, Hospitals & Schools, and any number of other commercial buildings. As well as doing the building work we had our own Joinery shop and it was recognised for turning out quality work. We were one of two Joinery companies renovating Commonwealth Banks around the whole of South Australia. We won awards for excellence both with the Architects and also the Master Builders Association. We supplied joinery for the new town of Leigh Creek; for the hospital and the community centre. Our joinery sits in schools, hospitals, banks, hotels, and many other commercial buildings all around South Australia. The joinery shop closed about 5 years ago.

Over the years we have built new school buildings at Trinity College, Xavier College, Gawler High School, and Gawler Primary School, St. Brigids, Gawler Blocks, & Gawler East Primary Schools. We have done major works on most schools & Hospitals in the mid north: Port Augusta, Quorn, Port Pirie, Whyalla, Clare, Woomera and the Barossa Valley. In the Riverland we have worked on Schools & Hospitals in Waikerie, Barmera, Loxton & Renmark, including new supermarkets at Waikerie and Renmark. We built the St John Ambulance centre, school, Bank and nursing home at Mallala, and many of the sporting ground clubrooms around Salisbury & Elizabeth. We continue with that type of work: building and upgrading Nursing Homes, Hospitals, Schools, Sporting clubrooms all around the State, including Adelaide and the suburbs.

Gawler Carpenters & Joiners, now trading as GC&J Constructions are a small family-owned general building company; now in its 3rd generation. The Company supports a staff consisting of a Managing Director, 2 Contract estimator/Managers, an Office Manager and 2 staff, 5 Site Foremen, and 2 Builders-Labourers. In years past when we had the Joinery shop we had a staff of 30.

It is now November 2019 and Ruth & I are happily living at 32A Cowan Street Gawler. I built the home after retiring in year 2000, and we moved in during that year.

I keep busy in my little workshop making various small joinery items and I play Contract Bridge twice a week.

In the words of A B Facey, “we have had a fortunate life”."

Please click here to read a tribute to Harry Brown published in the Bunyip newspaper 25 August 2021. 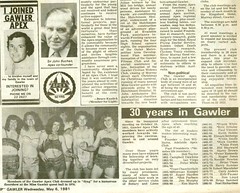 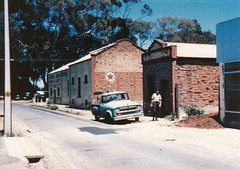 Harry Brown in Reid Street in 1972 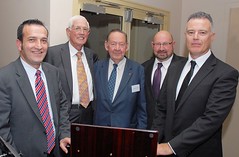 Do you remember Brown (Cr) Henry (Harry) Joseph ? Then Join up and add your memory here.