William was educated at a school conducted by the Rev. J Leonard, B A, and upon the completion of his studies entered the workshop of his father, continuing until the death of the latter, when he succeeded to the business (Coach Painter/House Painter/Signwriter). Mr Cox has always identified himself with the public life of Gawler, and his long term of service in the Corporation testifies to the high regard in which he was held by his fellow-townsmen.

In 1909 was health officer to the Gawler Corporation, has twice occupied a seat on the Institute Committee and for many years was a member of the Fire Brigades Board. He received his commission of Justice of the Peace on May 25, 1892.

Mr Cox has interested himself in every athletic association and Friendly Societies of the district, a member and Past Master of the Lodge of Fidelity, No 5, S A C and present secretary to the same Lodge, having held that position since 1890; has passed through the chairs of the Gawler Lodges of Oddfellows, Foresters and Druids and was the first country resident who had the honour of being elected D C R of the Adelaide District of the Ancient Order of Foresters; and is a Trustee of the I O O F, M U.. Mr Cox is a deacon of the Congregational Church.

William Henry COX married at the Congregational Church, North Adelaide, 11 October 1876 to Eliza JURY eldest daughter of Robert Hartup and Eliza JURY nee MULLETT. She was born 2 July 1853 at Adelaide and died30 January 1909 at Gawler. They had two children –

Hubert Egmont COX was born at Gawler on 8 October 1876 and died on 20 April 1952 at Adelaide late of Fullarton. He married at the Church of Epiphany, Crafers to Rotha Marion EVANS.

Seppie Eloise COX was born at Gawler on 14 May 1882. She married on 5 April 1905 at the Congregational Church, Gawler to John Henry Ward BOSWORTH

William Henry COX died on 31 July 1934, Gawler at the age of 85 years and together with his wife Eliza (Minnie) are buried in the Willaston Cemetery. 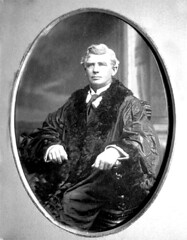 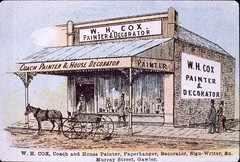 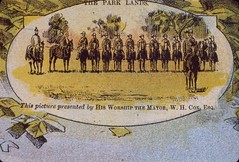 Do you remember Cox (Mayor) William Henry ? Then Join up and add your memory here.