E.H.C Page 354 “The fixing of the site of the Gawler Railway Station so far from the town has caused untold inconvenience and expense. At a public meeting held in 1876, in connection with the proposal to erect a tramway, the late Mr. George Warren stated that when the present site was fixed it was intended that a loop line should be made to the town at a future time. Some of the people of Gawler put obstacles in the way of the main line coming into the town, imagining that they would be enveloped in smoke, and that sparks from the engines would set fire to their property. The late Mr. John Rudall produced some of the old records and plans of the original survey of the railway, which was intended to pass through Gawler. He stated that before the present site was fixed by the Government in power at the time gave notice to the owners of property in the town through whose land the line would pass, but through opposition and influence on the past of some of the inhabitants, the present site was fixed. The place originally fixed for the station was what was known as Mahony’s paddock- east of the old cemetery.”

G.E.L. Page 18 “Great dissatisfaction was expressed by all the tradesmen and townspeople at the inconvenient distance of the station from the township ; and public meetings were held, and representations made to the Government respecting it, but all to no purpose ;…”

G.E.L. Page 24 “The Tramway, which was for some time a ‘bone of contention’ among residents, now extends from the Gawler Railway Station to the top of Murray-street. Two commodious cars, of American manufacture, run on it daily ; but the patronage accorded to this species of locomotion is not that to which it is entitled, and many persons either drive to the station in private vehicles or patronize Baker’s bus.”

G.E.L. Page 131 “For some years the Gawler Railway Station has been found inadequate to meet public requirements, and great inconvenience was felt on the arrival and departure of trains from the crowded state of the platform, the insufficient accommodation for passengers, and the limited space apportioned for a ticket office."

G.E.L. Page 132 “All of this has been remedied by the erection of a new and hand-some structure, which in the hands of Messrs. Robin and Hack, the contractors, and workmen employed by them, has been completed, and is now open to the public. The cost of this building was 4,200pounds ; and is, judging from its appearance, worth the expenditure.”…..”It affords regret that the town is situated at so great a distance from the station and though the intervening spaces are gradually being filled with substantial houses and shops, it will be some time ere these erections are sufficiently extended to cause the locality to be considered as belonging to Gawler. At present it is called “Basset Town” and after leaving it Gawler South, or the Munno Para East district, is passed through. The municipal boundary in this direction is the bridge over the Para. Communication between the Railway Station and Gawler proper is by tramcar and ‘bus-fare 3d.”

E.H.C Page 164 “The Gawler Railway Post and Telegraph Office was established in 1859.”

D.W. Page 102 “The New Railway Station, a fine specimen of Victorian railway architecture, was completed in 1879. It was built of combed slate with brick quoins, arches, string courses, chimneys and plinths. It replaced the original limestone structure built in 1857 when the first flower and flag-bedecked Puffing Billy steamed up the track from Adelaide, brass bands played and the ‘public houses proved totally inadequate to provide for so vast an influx’ ”.

D.W Page 227 “Among the attractions ….were the engine shed (1869), the goods shed (1878) and the train shed, built by James Martin in 1870.” ……”In 1911, the railway was extended up the Barossa to Angaston, North Gawler (now oddly called Gawler Central) was the first new station on this line. Most people, however, preferred to use the tramway until its closure in 1931.”

Please click here to look at the many photos compiled of the Gawler Railway station.

The curved roof rail shed covering platforms 2 and 3 was taken down in the last 12 months and has been placed in storage; to be restored/refurbished and the Government intends to reinstate it to its original position, with some modifications to allow for the structural needs relative to the electrification of the Adelaide-Gawler Line, possibly by 2015. Click here to read the pledge. 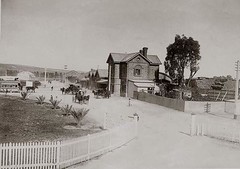 Gawler Railway station - Then and Now 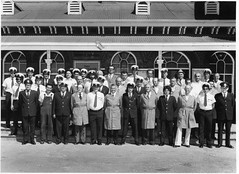 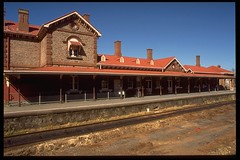 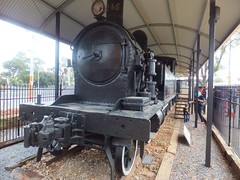 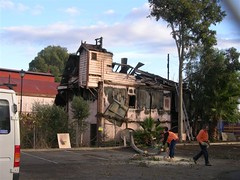 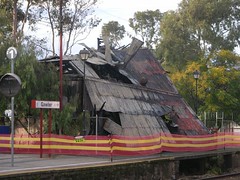 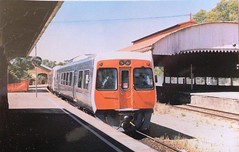 Do you remember Gawler Railway Station Nineteenth Street ? Then Join up and add your memory here.