Simon Bailey was born and grew up in the County of Dorset in England. After leaving school, he read music at The Victoria University of Manchester and then trained as a teacher at Cambridge University, After a couple of years teaching in Shropshire, he trained for the sacred ministry at Lincoln Theological College and was ordained Deacon in the Church of England in 1983 and Priest in 1984.

Fr Simon served two curacies in Leeds and Harrogate, then was Rector of a small group of parishes in the Diocese of Leicester (in stilton cheese-making country), before becoming Vicar of a suburban parish in Pudsey in the Diocese of Bradford. Fr Simon, along with his wife Jane and their two daughters Rebecca and Sarah, migrated to South Australia in January 2003 to become Rector of Christ Church, North Adelaide and then served as Rector of St. Saviour’s, Glen Osmond for nine years before moving to Gawler to become Anglican parish priest here in September 2016.

Once a very keen rugby player and cricketer, Simon now really enjoys his trumpet-playing with the Unley Symphony Orchestra (www.uso.org.au) 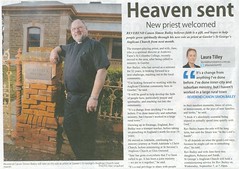 Do you remember Bailey Rev Simon ? Then Join up and add your memory here.