Gawler has lost another of its former business leaders with the death on May 18 2000 of owner and past managing editor of the Bunyip, Ken Lindley Barnet at the age of 80. A grandson of The Bunyip Founder William Barnet , he stepped in at a critical period in the newspaper’s history when it was heavily in debt and on the verge of being sold off or even shut down, to rejuvenate the business and ensure it remained one of the most vibrant country newspapers in the state.

He was also a pioneer of the suburban newspaper industry in Adelaide. Mr. Barnet achieved this through sheer hard work, persistence and an astute business and newspaper mind. When he stepped aside to let his sons take over in 1977, the business was in fine financial shape and ready to be part of rapid development and expansion of the region.

His legacy is one of the most highly regarded publications in South Australia.

The eldest son of Frank and Clarice Barnet , he was born at Sister Suttons private hospital in High street and lived most of his life at then family home on Calton road. After attending Gawler Primary , Scotch College in Melbourne and Gawler High, he left school at the age of 14 to begin work at The Bunyip in about 1935.

Ken went to printers trade school in Adelaide and after receiving his “ticket” came back to The Bunyip Office where he cut his teeth an hand type setting , working treadle printing machines and a lot of guillotining prior to becoming a qualified Linotype operator.

Those were also the times of the great Depression when money , resources and even food were in short supply, and most businesses struggled to survive.

On the outbreak of war , Mr Barnet joined the 18th Light Horse ( later the 9th/23rd). In an interview some years later he recalled being camped at Gawler racecourse “in company with chaps like Jack Ifould, Frank Allwood and Lang Slade to name a few old Gawler names”

After suffering a serious injury during a training exercise, he left the Army and joined the RAAF after recuperating , eventually becoming a fitter with ground staff. He joined the 34th Squadron wich was mainly involved with DC3s and he found himself in Darwin just after the bombing by the Japanese, and then served on the island of Moratai ( in the Celebes) and New Guinea.

His father had died prior to his overseas posting and more tragedy struck when he got word that his mother was very sick. After flying back from New Guinea , a journey that lasted several days, he arrived back in Gawler the day after she died.

After the war Ken Barnet set about building The Bunyip into a viable business again.

The Bunyip was near enough to being bankrupt and Ken had not much money, but Daphne ( Ken’s wife whom he married during the war) was kind enough to step in with finance to bolster the business until it started to pick up

The print industry virtually took over his life for the next 25 years or so , his tasks – as wellas administration- included editing, writing, proof reading, printing and even cleaning the big rollers on the printing press at the end of every run.

He acquired other newspapers, including the Salisbury News,(1948) which became known as the Salisbury / Elizabeth Times. It was the first suburban newspaper in South Australia, and its mix of local news and sport was an instant success.

The Salisbury News and The Bunyip as sister papers thrived, and as Elizabeth grew in the late 1950s, Mr. Barnet extended the coverage of the News to the rapidly growing satellite city, and it became the Salisbury-Elizabeth Times, Circulation continued to grow.

In August 1959, Ken Barnet installed his pride and joy- a flatbed semi rotary newspaper press capable of delivering 16 page papers at a rate of 4000 an hour counted and in bundle of 20. The “Cossar press “ – as it was known and held in awe throughout the industry- weighed 16 tons.

But, as with many businesses that grow like topsy , decisions had to be made. The competition from The Messenger newspaper was now intense, and in the early 60s he sold the Times to an ambitious young man by the name of Rupert Murdoch, in one of his first purchases before launching his international campaign.

But thankfully Mr Barnet held onto his beloved Bunyip, and he continued producing a quality country newspaper until his retirement in the late 1970s. He and his wife Daphne moved to West Beach and then to West Lakes Shore. It was in these years that he had the opportunity to unwind from the pressures of running an intense and demanding business.

Remembered as a loyal and devoted husband for 56 years , he had a wonderful and sometimes wicked sense of humour. 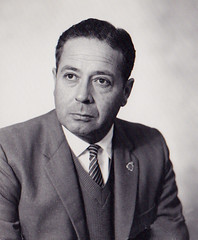 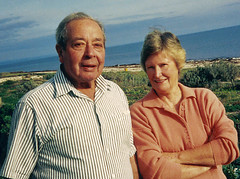 Do you remember Barnet Ken Lindley ? Then Join up and add your memory here.