Adelaide 1836 Gawler 1839.-payment to Colonial treasury (Murray, Reid, King and others) of deposit allowed them to survey district - not exceeding 15000 acres and select up to 4000acres. Murray and Reid's chosen survey area was on the junction of N and S para rivers. (as advised by Col William Light) and considered an ideal site for a country town.

Thomas Hutchinson was born 1821 in Northumberland England and in 1849, aged 28 moved to Gawler briefly before heading to goldfields in Victoria where he made his money. • Returned to Gawler and with his wife lived the rest of his life off investment income. Had no children or dependents. Frugal lifestyle. • Held positions as town inspector - tree logs anecdote • Member of the council. • Involved in Gawler Benevolent society and in his quiet way relieved many cases of distress and poverty. Died August 29, 1901 - (age 79) left his estate, valued at £10000 for the establishment of a hospital in Gawler subsequent to the death of his wife. Mrs Hutchinson died April 11th, 1911.

Why a hospital? How was Health care delivered at this time? Essentially by private doctors and midwives. Doctors existed (Dr Morton, 1840s, Dr Nott 1852 (died 1872) and home taken over by Dr Dawes. - speaking tube - he had a 1908 de dion Buton) Son later took over the practice. Working out of homes - no surgeries. No public hospitals in the area. (Angaston hospital 1920) Dr Dawes had several beds in his home to accommodate the sick. Also had a dental chair. (Local anaesthesia - originally cocaine was used but less addictive Stovaine (1903) and Procaine 1904 used in dentistry) Also, Willows Hospital run by WH Scholz in Light Pass catering for fractures sprains and rheumatic disease Angels of Mercy- Nurses who travelled roads by horse bicycle and camel to attend sick and poor in the Gawler area. Worked in collaboration with doctors and later with the Hutchinson Hospital. (Mary Foster -the first Gawler Angel, opened first RDNS centennial in the area in 1899) Interestingly in 1910 life expectancy in Australia was 55 for women and 41 for men. (accidents TB and Typhoid commonest in 20-40 age group)

It has been the policy of the Hutchinson Hospital Board in securing its furnishing and equipping requirements to obtain everything possible in Gawler and thus encourage local industry and trade. They have even had their mats and baskets manufactured in the town. It is not generally known that Mr. Walter Veale, of Gawler South, though handicapped by physical infirmity, has learned the art of producing these articles and can turn them out equal to the best. A large double brush mat 6ft x 4ft at the front door, with 'Hutchinson Hospital' worked in was much admired by members of the Board on Monday evening, and three other mats of the same type but smaller were equally meritorious. The clothes and bed baskets supplied by the same maker were also very satisfactory. The Board were also successful in securing several easy chairs which were made by a Gawler man, Mr. Webb. 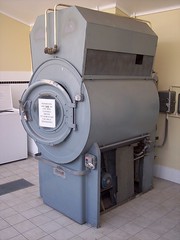 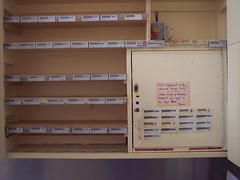