In the latter 1940s and early 1950’s The South Australian Highways Department planned to build a new bypass road around Gawler. The Highways Department plan included a double lane road that passed through the land of Mr D.G. Willison south of Gawler at the southern end of the racecourse. It then travelled along O’Toole’s Road to the west, crossing Angle Vale Road at Prizabella’s Corner, then over Winkels Bridge, out around Willaston, and then south of Willaston Cemetery, connecting again to Main North Road.

The intersection where the new highway was going to reconnect in Willaston was near land that was owned by the Rawlings family. The Rawlings were approached by Petrol company Shell, to purchase the land so they could build a service station. Instead, Laurie Rawlings, decided he would build and run the service station himself, on his land, under Shell’s licensing as a Neptune Service Station.

As fate would have it, the proposed Bypass was altered many times, and when it was eventually built, passed the northern side of the Willaston cemetery. This left the Neptune Service Station a long distance from the highway it was intended to service.

Laurence and his wife, Joan persevered with their service station, the only 24 hours service station in Gawler at the time. Joan would work days, and Laurie nights. A service bell was installed that could be heard next door at the Rawlings House. Laurie would wake up, walk next door and pump petrol or check oil for afterhours customers.

Rawlings Neptune Service Station phone number in the 1950s was: 526-U. 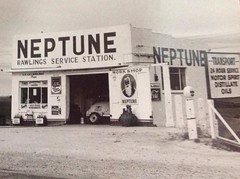 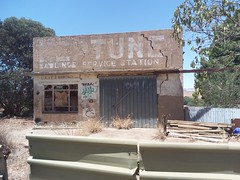 Do you remember Rawlings Neptune Service Station ? Then Join up and add your memory here.