The first settler to come to Gawler was John Reid, who had migrated with his wife Jane (nee Livingstone) and their 6 children from Newry, County Down, Northern Ireland aboard the ship Orleana to South Australia in 1839.
They built their farm and homestead Clonlea in an area just inside the entrance into what is now called Clonlea Park.


The eldest child of John and Jane Reid was Eliza Sarah Reid, born in Ireland on 16 August 1824, so she was 15 years old when she came to Gawler. She married Dr David Mahoney on her 25th birthday (16 August 1849) in St George's Anglican Church, Gawler.


Compiled by Dr. John A. Stephenson


EXTRACT FROM PAPER WRITTEN BY ELISA SARAH MAHONY [Note the spelling of Mahony not Mahoney] on 23/1/1898 on page 78 ..."Mr Paxton...had a mortgage over all of my father's property, which he forclosed, leaving us the homestead and 40 acres of land. He [Paxton] laid out Willaston and named it from where he lived in England." [There are 2 Willastons in Cheshire - one 10 miles NW of Chester and the other between Crewe and Nantwich.]

Page66 NOTE 41 - "Mr Reid has a comfortable cottage with about twenty acres of land fenced in and under cultivation, and which promises an abundant crop. I am told that from seven to twenty persons daily pass this way. (Major O'Halloran's Journal, 30th October. 1839) [Coombe page11]. NOTE 42 - "Concerning Mr. John Reid's land, the document states that one paddock of twenty-seven acres was enclosed partly with posts on ends and partly with posts and four rails, and one paddock of fifteen acres with posts and four rails. There were six acres under wheat, four under barley, two under oats, one and a half under maize, ten under barley and one under garlic. Water requirements were met by a well, forty-two feet deep, with seven feet of water in it and by the North Para. "This property is bounded on one side by the North Para. The land not having been fenced-in in time, the cattle destroyed a portion of the crops. There was one dwelling house, three cottages, a dairy, and out-houses."(From the official statement, 1840, Coombe, p11.)

A.P. Harvey's book [ISBN 0 9588286 1 X] "I called it Salisbury" [a biography of John Harvey "The founder of Salisbury"] Page 37...."...in 1845...Gawler Town was a centre of commerce. John Reid and Patrick Devlin had built a boiling-down works, which could hardly be overlooked with its huge vats, the smell of tallow, and the wool-washing operations in the Gawler River. This came into constant use in 1844-45, when the glut of mutton and beef forced prices down to 1s per head of sheep and 8s per head of cattle."

For more information on the Reid family, please <click here> 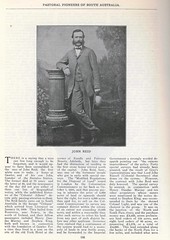 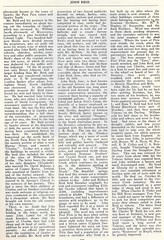