Some years ago it became known that a descendant of Governor George Gawler, a resident of Perth, WA, had the misfortune of his house being burned down. Fortunately, the salver had been stored in a metal safe and had not been damaged.

The salver was first offered to the SA Government, but it was understood that there was little interest as it had a lot of silver mementos and this particular item was not made of SA mined silver. Subsequently, the salver was offered to Gawler Council again it was understood that Council considered its role was to concentrate on local matters rather than the acquisition of artefacts. The salver was held at Government House for safekeeping until a buyer could be found.

John Thorpe promoted the idea to the now late Craig Barnet and Peter Whimpress that it would be a shame if this valuable icon, bearing Governor Gawler’s thanks to the people of South Australia for his efforts to set the new province on a sound economic base. The asking price for the salver was raised in seconds by these three Gawler businessmen in equal thirds.

The then Governor Dame Roma Mitchell invited the three purchasers and their spouses, together with the then Mayor of Gawler, Dr Bruce Eastick to attend at Government House for afternoon tea in the historic East Wing which was part of the Governor’s Residence at the time of occupation by Governor Gawler. Notwithstanding John’s mobile phone interrupting an interesting chat with the Governor during the presentation of the salver, it was an interesting experience.

A photograph taken outside of Government House to record the occasion features the Governor, Dr Eastick and the three purchasers, all appearing to be proud of the fact that the salver was to reside in Gawler.

Some years later then Councillor Johnson approached Craig Barnet with the suggestion that Gawler Council may be interested in acquiring the salver. The three holders agreed to this as their intention had been for the permanent preservation of the salver for the Gawler community. Gawler Council kindly refunded the purchase money paid for the salver.

It had been requested that the salver be mounted In a showcase in the Gawler Library Reading Room on permanent public display. It is understood that the fear of it being stolen lead to the salver being stored with other historic artefacts in the “Council Dungeon”.

The salver has been displayed from time to time and it is to be hoped continued opportunities will be made available in the future. Perhaps a full-size photograph could be permanently displayed in the Library Reading Room. 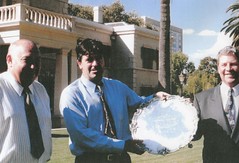 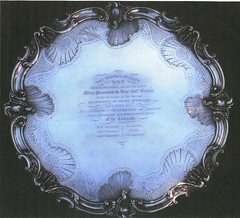 Memories of The Gawler Salver

Do you remember The Gawler Salver ? Then Join up and add your memory here.