This is a single-storey, double-fronted late-Victorian-era villa with a projecting bay to the south side. It is constructed of random coursed sandstone with a tuck-pointed finish and overpainted brick quoins and dressings. The projecting bay to the side is constructed of rubble bluestone with rendered dressings and features turned timber finial, cast iron lace to the gable and hood mould over the window.

The hipped roof and projecting side gable are clad with corrugated metal. Windows are timber-framed, double-hung sashes to either side of the central timber panelled door with sidelights and fanlight. Chimneys are overpainted brick with shaped brick caps.

The return bullnose verandah is clad with corrugated metal and is supported on heavy timber posts with cast-iron frieze panels and corner brackets.

The front boundary is defined by a low rendered stone wall with moulded piers, and elaborate cast-iron panels and gate.

Constructed around the mid-to-late 1890s, the dwelling at 15 Barnet Road is associated with the continued prosperity and expansion of Gawler, through its satellite subdivisions such as Bassett Town in light of heightened commercial and industrial activity and the demand for more residential land.

The fine and largely externally intact dwelling is an excellent example of a late-Victorian villa with emerging Edwardian overtones, constructed of local stone, brick and cast iron.

Though the dwelling might have been constructed prior to his purchase, it is of significance for its association with Frederick May, notable Gawler businessman, engineer and founder of one of Gawler’s largest foundries, who’s family owned the property from at least 1904 until 1949.

The second subdivision of Bassett Town, located to the west and southeast of the Gawler Railway Station, was surveyed for sale in April 1873. This was likely in response to the growing demand for residential and industrial property adjacent to the station and other industry being conducted in the original Bassett Town (1857) and Gawler South (1858) subdivisions. The lodged subdivision plan notes the area defined on the western side by ‘Adelaide Road’ (later Barnet Road). It was not until 1892 that Section 3222, Hundred of Munno Para was surveyed by the government for sale. The highly successful May Bros.

Gawler Foundry was established in Bassett Town by Frederick and Alfred May in 1885. In 1904 Frederick May, Machinist, Gawler South was proprietor of an irregular allotment comprising Portion of Section 3222, Hundred of Munno Para and Portion of a closed road situated across the boundary of the Hundreds of Munno Para and Mudla Wirra. On Frederick May’s death in May 1937, the property passed to two family members, Reginald Clarence May and Frederick Deland Sylvester May. The May family held the title until purchased by William and Alice Watkins in 1949. 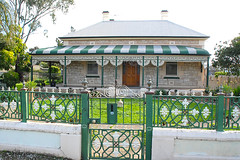 Do you remember Barnet Road 15 ? Then Join up and add your memory here.