On 6th September 1926, Minnie and Alfred Mewett of Evanston became the proud parents of their first born – named and baptised Evelyn Lily; Evelyn after a kindly neighbour, and Lily after Minnie’s sister in England.

Alfred himself was the second of eight children, all born at Gawler. Minnie had come to Gawler from Lincolnshire to work for Mrs Gordon Law-Smith two years previously. Her sister, Elizabeth was present on this day and helped my mother with her premature infant – wrapped in cotton wool, so I’m told, then taken to Dr Dawes’ hospital. On 3rd of October I was baptised at St George’s Church, and the baptismal party then viewed Gawler from the church tower! (I don’t remember!)

Elizabeth was to be a constant mentoring influence in my life till her death in 1987 – aged nearly 95 years.

Two more daughters, Edna and Marjorie later completed our family. My father used to cart hay to Adelaide on a trolley drawn by his team of draught horses. There were no bitumen roads then, and it was a 2 a.m. start for the journey. In 1930, we moved into our own little home of quarried stone with iron roof – two very large rooms with another added later. I can clearly remember walking the short distance with my mother and our toddler Edna, shifting, and carrying the precious kero lamp base!

I attended Gawler Blocks Primary School (now Evanston Gardens) from 1933 to 1939. About 40 students, 1 room, 2 teachers; a mile to walk to school – no buses or family vehicle then. A change of sox in winter weather, and always checked for wet clothing by our headmaster’s good wife, Mary O’Loughlin. Dried out near her kitchen fire if necessary! Discipline was strict, but a love of country was nurtured; and the three ‘R’s were considered well, especially spelling.

At 14 years, I was confirmed at St George’s Church, Gawler, a much revered occasion. I can remember the text for the service.

I gained my Intermediate Certificate at Gawler High School, and was encouraged to pursue a tertiary education by the winning of a scholarship; however, the offer of immediate employment was taken up, and I was happy to work at the Gawler Savings Bank (now Bank SA) for 2½ years. We worked a special few weeks of ‘over-time’ in June each year doing interest calculations; these had to be checked and re-checked. No computers then, but we did have charts to assist us. The 2 mile bike ride home on dark roads – not many cars about then. Large stones in the home street (unmade) were a challenge! January 1945 saws me enlist in the Women’s Auxiliary Australian Air Force (W.A.A.A.F.). The first six weeks – rookies’ course at Larundal, Victoria were intense – lectures, drill, cleaning duties before breakfast, keeping lockers tidy, blankets folded, regular locker and personal dress inspection.

After rookies, I was trained to become a teleprinter operator, and worked at Melbourne H.Q. Telecommunications Unit, at Frognal, Camberwell. Drama of ‘thunder storms’ in Darwin causing our teleprinters to ‘race’… shift work; standing shivering in the Melbourne cold, waiting for the mess staff to admit us for breakfast – grinning at our discomfort from their warm kitchen!

Nevertheless, I was proud to serve my country and assist the war effort! Many years later, I learned that the Melbourne office had a direct line to the War Office in London.

Demobilisation, then home in 1946. Six weeks home, missing company a lot, worked as a home-help on a farm at Naracoorte. Two children aged 3 years and 6 months. The latter is now the Manager of Chowilla Station and has grandchildren.

Moved to Sydney later that year to join some ex W.A.A.A.F. friends, intending to do a course in dress-making, but the powers-that-be had not transferred my application from Adelaide, so as ex-servicewomen were quickly employed, I worked for 3 months at a boutique dress-making shop at Kings Cross (!); 5 months at the office of the Land Sales Control – not enough to do there, so I entered nursing at the Canterbury District Memorial Hospital.

Homesickness overtook me so I came home to Gawler in December 1947. Restless again, so went on a working holiday to Glossop in the Riverland.

There, I met Cyril (Squib, Bing) Crosby, newly demobbed from the Army, and glad to have a job with the Engineering and Water Supply Department.

We were married at St George’s Church, Gawler on 18th December, 1948. Our honeymoon was spent at Port Elliot and Tickera(!), where I got to know my new family – memories of Tickera (beach), collapsed tents, rabbit stew 3 times a day, flies!!, much laughter! Then on to Glossop to our caravan. Train from Gawler, to Morgan; coach to Glossop. Ten pieces of luggage, and a broom. I had to carry the broom!

After the Christmas break, we transferred to Loxton. Anxious moments going up the steep Bookpurnong Hill, towed by a truck per kind permission of the Waterworks boss. Our personal transport was a bike each.

In 1949, we were present at the official opening of the Loxton Irrigation Scheme – little girls in white frocks, boys in grey and white – and what a dust storm blew that day!

The gracious lady of the River, the paddle steamer, ‘Marion’ used to chug past each week within hearing distance of our little home.

Our caravan proved inadequate in the hot summer. The post-war supplies of corrugated iron were taken by the Government for housing the many migrants working for the E. & W. S. Department. So, being on a temporary site near the works depot, we built a neat tent kitchen and bathroom of white-washed flour bags with malthoid roof covering, masonite lining, concrete floor and built-in wood burning stove – cosy in winter and cool in summer. No electric power was available to us for 6 months, so a kero frig was most welcome.

In due course, two iron, masonite rooms were added in time for the arrival of our first baby – Mary Jean on 4th October 1950.

I remember, in 1954, driving with Cyril and Mary to Renmark in our single seater Rugby tourer (1926 vintage) to see our loved Queen Elizabeth. A tyre blow-out sent us careering into the scrub and then back onto the road. Luckily, no trees or cars in our path and cheers for Cyril’s driving skill.

He taught me to drive in the same car (1951). While out refilling kero lamps at an irrigation channel site, miles from anywhere, he shouted “Stop! There’s a tram coming!” We moved to Gawler in 1954, my parents happy to enjoy their first grand-child. Within a few years, we were blessed with three more children – Peter, Faye and Susan. Busy years, children growing up, church and school activities and responsibilities. As with many young mums and young children, health and strength not A1 at all times …. but so many blessings outweighed the misfortunes.

Happy Christmas holidays at our modest little grey house at Wallaroo North Beach since the early 1960s. Cyril’s parents and my sister and family lived in neighbouring towns, Alford and Kadina.

Sadly, my own dear parents had died in 1959, both suddenly with heart ailments, and within 10 months of each other.

At this stage, three of our children were married. Cyril had retired in 1979. We had been made aware of another Crosby family (closely related) living in far north Queensland, discovered by an historian who under-took to find the family. So, over a number of years, we were to travel up to meet them. It was interesting to hear their history of outback life.

I attended the World Expo in Brisbane in 1988, which I regarded as my ‘trip around the world’; visited amazing exhibits – Britain, Canada, The Vatican, the Pavilion of Promise, to name a few …

1985 saw me join the Gawler R.S.L. Women’s Auxiliary, and, over the years, have served as President, Secretary and Treasurer; awarded Life Membership in 2004. For 18 years, State Councillor for Central Council of R.S.L. Women’s Auxiliaries (retiring December 2012). Membership activities include raising funds to send parcels to wounded service personnel who are transferred from Afghanistan to the big military hospitals in Germany.

In latter years, also enjoying Gawler Ladies Probus Club membership. My main interests are home and family, and garden and church activities; also regular ‘checking out’ of our ‘little grey home’ at North Beach, and visiting my sister, Marjorie at Kadina.

Sadly, Cyril’s health and strength deteriorated from early 2010, and with much help, I was able to nurse him at home, where he passed into God’s loving care on 24th April 2012.

We have been blessed with 8 grandchildren and 7 great-grandchildren, and many good friends.

I consider that I have led a very fortunate, happy and at times – adventurous life, by the grace of God. Evelyn Lily Crosby September 2012

It is with regret that we learnt of Lil's passing on Wednesday 14th August, 2019. She will be missed by many people. We extend our condolences to all her family.

Click Here to read the article from the Bunyip 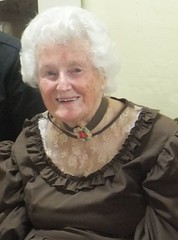 Do you remember Crosby Evelyn (Lil) Lily ? Then Join up and add your memory here.