Tony is currently the Member for the State Electorate Light and the Deputy Speaker of the South Australian House of Assembly.

In addition to his electorate duties, Tony is the current Chair of the Ministerial Advisory Group for Volunteering, the National Convenor of the Forum of the Italo-Australian Parliamentarians and the Deputy Chair of the Business Development Council.

Tony was re-elected to State Parliament in March 2010 after becoming the first Labor member to be elected for the seat of Light in almost 60 years in 2006. Tony was one of only two Labor members to increase his vote at the 2010 State Election.

Prior to entering State Parliament in 2006 Tony was the Mayor of the Town of Gawler and employed as the Business Manager at Trinity College Gawler; holding both roles for about six years.

Tony served for almost 25 years in Local Government, contesting his first election as a Councillor for Evanston Ward in the (then) District Council of Munno Para in 1981 at the age of 21.

Tony has lived in the electorate since he arrived from Italy as a young boy in 1963 with his parents Raffaele and Maria and older sister Antonietta, and lives with his two sons Raffaele and Stefan at Kudla.

An accountant by profession, Tony has worked in the Chartered accountancy field and in State and Federal Public Administration since graduating from the University of Adelaide with an Economics Degree in 1980. Tony went on to complete a Masters Degree in Education Management majoring in Human Resources Management in 1997 at the Flinders University of South Australia.

During his time in local government Tony took an active interest in planning and development issues and community engagement and community capacity building and was the inaugural Chair of the Town of Gawler Development Assessment Panel.

As the member for Light Tony has continued his interest in planning and development issues and was successful in negotiating through parliament a private members bill to provide commercial buildings within historic conservation zones greater protection.

As a parliamentarian Tony has promoted the reform of the Franchise Code of Practice, the introduction of a Small Business Commissioner, greater protection for farmers when purchasing machinery and greater access to justice through his work in developing a State based Tribunal to provide for the independent review of State and Local Government decisions and minor civil matters.

Tony was recently successful in moving a motion in State Parliament seeking to acknowledge the pain and hurt suffered by people of Italian, German and Japanese background (amongst others) who were interned in Camps around Australia during World War 2 despite them not having committed or alleged to have committed any crime. 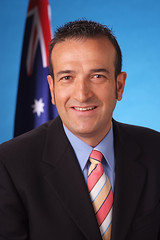 Do you remember Piccolo (Mayor) (Tony) Antonio ? Then Join up and add your memory here.