Difference between revisions of "Wedding Bill and Mel"

Our Great Grandparents came out to Australia from Tocheim in Russia on the sailing ship “La Rochelle” on September 3rd 1855. They settled in Wasleys and our father Arthur [Dick] was born one of 6 children.

He married Annie May Gunther and moved to Kapunda, where Mel was born in 1933; and in that year they shifted to Gawler Blocks.

Mel’s sister Jean [1934] and brother Bill [1935] were both born in the Gawler Hutchinson Hospital.

The family moved from Gawler Blocks to Duck Flat. Whilst living at Duck Flat, dad used to ride his push-bike to Blanchetown on Sundays, cut wood with an axe by hand all week, and then get a ride home to Gawler on Fridays. He ran a wood-yard and mother would deliver the wood in a pram while father was away cutting more wood.

The family then shifted to Tod Street in Gawler and then we children attended the Gawler Primary School and then on to the Gawler High School on Lyndoch Road. During the High School years we used to enjoy the annual sports days; alternating between Gawler, Birdwood and Nuriootpa High Schools.

On leaving school, we were all fortunate enough to easily get employment; Mel at the Gawler tyre Service [now Steinborners], and Jean at the Egg Factory [operated and owned by H.T. Brown, who also had the Shell petrol depot which is now the Shell Service-station].

Bill’s first job was at the Gawler Hospital, and then was employed at Jeff’s Flour-mill. He joined the State Government to work in Aboriginal Affairs and in the Hospitals Department and then worked within the Woods and Forests.

Mel was transferred to Port Pirie with Dunlop and played football for the Proprietary Football Club. Bill went to Norwood Football Club where he was outstanding; winning the Club’s Best and Fairest award on many occasions. Bill also represented the State many times and was selected in the All Australian Team at the Brisbane State’s Carnival [no longer played since the introduction of the A.F.L.]

Both Mel and Bill studied Accounting at the Gawler TAFE College after being encouraged to do so by the Principal, Mr John H. Chambers (who was our Intermediate High School teacher before joining TAFE). We both became qualified Accountants and went on to teach these courses at TAFE until we retired.

Mel married Patricia Chaplin at Glenelg in 1963 and have 3 children; Richard, Margaret and Stephen. Mel and Pat now live at Henley Beach.

Jean married Malcolm Scott and lives in Elizabeth. They had 3 children Peter, Anthony and Dianne.

Bill married Helen Fordham and had 3 children; Robin, Timothy and William. Bill unfortunately passed away in 2008.

We three have had many happy times living in Gawler and note the many changes to Gawler over the years [particularly the increase in traffic and the introduction of Murray Street’s pedestrian lights – a sight that I never ever thought I would see]. 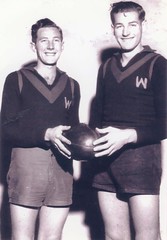 Memories of Wedding Bill and Mel

Do you remember Wedding Bill and Mel ? Then Join up and add your memory here.