Frank White was born in Mount Gambier, a second son for Bill and Mary (nee Purvis), when Bill was stationed as a policeman in Penola.

Frank’s next move was to Caltowie in the mid north where he began his schooling. Caltowie is a cold spot, and Frank told the story of gathering ice from water troughs around town with a friend, then trying to sell it to the local housewives. The young boys couldn’t understand why no one was interested, there weren’t many ice chests around at that time.

The family transferred to Barmera for five years, and then shifted to Tanunda where Frank completed Primary School. After two years at Nuriootpa High School, he moved to Rostrevor College as a boarder. He always spoke fondly of his boarding years there.

Whilst studying Dentistry at Adelaide University, Frank was impressed by some of his fellow students, in particular the older returned soldiers who were determinedly forging new lives post the Second World War. They graduated as a group in 1950. This group of men kept in contact with regular lunch gatherings. During Frank’s university years he was a keen footballer. He played for Tanunda and was a member of the 1947 premiership team.

Frank practiced at Port Lincoln for two years, then after spending two and a half years at the Franciscan Seminary in the eastern states he returned to South Australia, and purchased a dental practice in Gawler.

In 1956 he married Beth Smart and over the next thirteen years they had seven children – Jane, Anne, Andrew, Cathy, Peter, Chris and Celine.

Frank remained active in community and church affairs until retiring from dentistry in 1987. During this time he was a member of Gawler Apex Club [and was awarded Life Membership], District Governor of Apex, Charter President of Gawler Lions Club, District Commissioner of Scouts, and President of the Gawler Golf Club when the new course was established at Sandy Creek.

His community involvement continued into his later years in his work with Fred’s Van, and up until very recently, Meals on Wheels.

Frank gained much satisfaction from numerous family building projects; the most significant of which was the construction of their new home at Concordia in 1988. Frank loved living in his own patch of paradise where he enjoyed daily walks and many family barbecues with his ever-growing family. Frank remained living at Concordia in peace until his death. 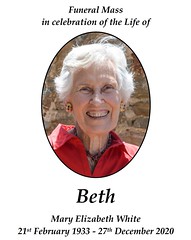 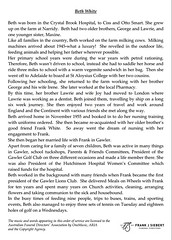 Kurt remembers: My holiday with frank and the family back in 2004. He was my namesake and was such a big hearted man who never seem to miss my birthday every year. Anyway if there maybe anyway i could contact grandbeth or the family please get in contact with me on kurt_koroi@y7mail.com.

Do you remember White Dr Francis (Frank) Richard & Mary Elizabeth (Beth) ? Then Join up and add your memory here.