Although born in Cornwall, England in 1837, to F.E. and Frances Wincey, William Faulkner Wincey came to Australia with his parents as a two year old, and grew up in Adelaide. As a youth he was an articled clerk in a solicitor’s office, and after a term as an accountant, entered into a partnership with Mr. James Pearce and acquired the timber merchant business of Padman and Company, which were located in Gawler and Kapunda, and remained there under his death on October 31, 1894. Mr. Wincey is buried in Mitcham. He married Mary Jane Weaver in 1860, and they had 10 children.

Mr. Wincey held strong convictions on anything that took his attention, and his conscientiousness was equal to the thoroughness with which he prosecuted any cause he took up. An example of his characteristic zeal and persistence was in how he championed the cause of the Barossa Water Scheme. In 1864 he represented the South Ward in the Gawler Council, and became Mayor in 1873, and held a further term. Whilst Mayor, the road via Flinders Terrace to Willaston was open, which had been a controversial issue, with Mr. Wincey purchasing some of the allotments to pave the way to its success. The McKinlay Monument was also laid in his term as Mayor.

A member of the Gawler Lodge of Oddfellows, Mr. Wincey was well respected for his business integrity and the straightforwardness he brought to community duties, which included being a member of the Gawler School Board of Advice for nearly 20 years, many as Chairman, and his role as treasurer of the Tod Street Wesleyan Church for 30 years.

In 1869 when a new church was built, William Wincey financed the venture to the tune of £ 3,812. He was always a prominent speaker on political matters at public meetings in the town, and his views were advanced with force and consistency – opposition fanned the flame of his enthusiasm! Mr. Wincey declined to nominate for a Parliament seat, preferring to keep his politics local. 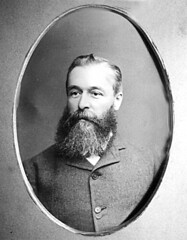 Do you remember Wincey (Mayor) William Faulkner ? Then Join up and add your memory here.