I was born 9th October 1957, 5 days after the first man made object was launched into space, at the Hutchinson Hospital, East Terrace Gawler East.

I was the second child of John and Jean Ashcroft who lived in Union Street Gawler. I attended the Elsie Ey Kindergarten in Murray street Gawler in 1962, then spent grade 1 at Gawler Primary School in 1963. In 1964 I attended the newly opened Gawler East Primary School on Lyndoch Road Gawler which was the former Gawler High School. I then attended Gawler High School on Barnet Road Evanston in 1970 leaving there in August 1973.

My childhood playground was Pioneer Park, across the road from us in Union Street, and I remember playing between the headstones that were in the park until they were removed. I also frequented the North Para river mainly around the Murray Road ford and the area which is now Clonlea Park, notably the ‘redbanks’ cliff swimming hole. Later in my teen years journeys by bicycle to the Barossa Goldfields were made to discover ‘new areas of exploration’ and fossicking.

My working life began with part time work at Woolworths in Murray Street at the time as a bag packer and shelf stacker after school, the times of paper bag packing for customers with ‘car service’ to the customers car, and mechanically operated cash registers where the girls who operated the registers always worked at a furious pace entering the groceries into the register as quick as they could. There were even competitions for the ‘fastest checkout chick’ on the registers.

During 1973 I was offered an apprenticeship as a Letterpress Printer with The Bunyip Newspaper, starting a lifelong career in the printing game. Newspaper printing was the main area I was employed for with what was called general jobbing printing performed in between issues of the paper each week. The machines I operated were the Cossar flatbed rotary letterpress newspaper machine, Heidelberg Platen and a Mercedes Glockner flatbed letterpress machine. Later in 1977 a Heidelberg KORD offset machine was installed and I was trained in this ’new’ style of printing.

For the next twenty years or so the printing industry underwent a dramatic change in technology of which the newspaper followed, allowing me to enter into a world of computer graphics and making colour printing easier with the machinery that we had to use.

In 2000, I acquired the general printing business of The Bunyip, and formed Bunyip Print & Copy, and left the newspaper business after 27 years. Operating out of the same building as The Bunyip newspaper, technology changed dramatically again for several years where the ‘new’ style offset printing from the 70’s has diminished significantly, being replaced with Digital printing machines.

In 1979 I married and moved to Roseworthy where we had 3 daughters and currently have two grandchildren. In the early 80’s I joined the Country Fire Service in Roseworthy and rose through to Brigade Captain from 1994 to 2009. Currently still an active member, I had the opportunities to attend some of the States worst fires during my time including Ash Wednesday 1983, Sydney Bush-fires 2002 and Victorian Alpine fires 2003. 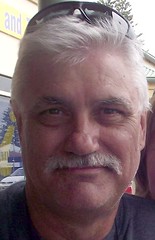 Do you remember Ashcroft Peter ? Then Join up and add your memory here.