Miss Florence Louisa Barnet obituary , July 17, 1945 Born September 28, 1875 died july 17, 1945 aged 70. A life illustrious to the district ended in the passing of Miss Florernce L. Barnet, which took place in the Hutchinson hospital in the early hours of July 17 1945. She was the second daughter of the late Mr. and Mrs. William Barnet, founder of “The Bunip” and of “Pine Lodge”, Gawler; and virtually devoted her life to the advancement and betterment of Gawler and its surroundings. In early days, she was the entrepreneur of all entertainment, and it can be said without exaggeration that thousands of pounds were raised for local public bodies through her instrumentality.

She accepted the mantle of her elder sister, Miss Emily M. M. Barnet, in the advocacy and welfare of the D.B.N.S., and was most active in its interests until some months before the Great War, when she travelled abroad on the Continent. Miss Barnet was caught up in the war’s alarms and much influence and money was used to effect her return from Europe to England before the clash of arms began. Even on holiday this splendid woman could not desist from planning; and in London, through the help of Sir Edward Lucas, then the State’s Agent-General in England she approached the famous Steinway piano people, and laid the foundations for ultimate ownership of such a beautiful piano for the Gawler Institute, she accepting the onus of raising the capital required to make it a gift to the people. In all, around £1000 was garnered through concerts, etc., and Sir Edward, playing his share in London, the Steinway came to Gawler and today is the admiration and the envy of all musicians.

Easing her efforts in this direction, having accomplished that which she set out to do, Miss Barnet made available to the district her services as a raconteur of her experiences abroad. Her sense of observation and piquant manner of expressing these impressions made her services much sought after, and there is not a meeting place within the district in which she had not spoken, to help some deserving cause along. All philanthropic movement and her unstinted support and driving organisation, and she was one of the loyal workers associated with the then Mayoress Mrs. W. H. Cox, in the maintenance of the Gawler Cot in the Children’s Hospital over a score of years. Musically, Miss Barnet was much sought after as teacher and accompanist and her pupils could be counted in hundreds who proved her qualifications by the many certificates gained in public examinations.

Following the last war and the subsequent depression, the financial affairs of the D.B.N.S. began to touch low ebb and Miss Barnet conceived the happy idea of the formation of a Ladies Service Association, who, in the pleasure of a game of bridge also contributed splendidly towards the uplift of the local nursing branch. For many seasons this bridge social afternoon has flourished, and Miss Barnet maintained the secretarial duties throughout. Each year a cheque for £30 or more has been handed to the Treasurer of D.B.N.S through the instrumentality of the Service Association.

Again, when the Country Women’s Association began to expand its operations and sought the new branches Miss Barnet accepted the Presidential duties in Gawler, and so enthusiastically did she labor in its interests and progress. That no change of administration was sought when she was stricken by her long illness. Members of the C.W.A. will sorrow deeply over such an efficient executive being available no more.

And so mention could be made of her connection through the whole gamut of public institutions in which women work. To write her history means in no small portion to write the history of the town. The Hutchinson hospital had a strong advocate in the deceased over many years. In church work she gave allegiance to the Congregational, and was active in its interest over the years. The Guides had an enthusiast in guiding the young along right and useful paths; and the Agricultural Show had her support and influence. Miss Barnet, taking life on the whole, had been a most healthy person and could give of her abilities in all directions. However, in the last 12 months toll was taken by Nature for her vibrant vitality, and a peculiar suffering evolved which virtually deprived her of food. For the past few months she lived an existence under mechanical feeding. So strong was her optimism that she looked forward to again taking some part in her big public life. But it was not to be. After treatment at Memorial Hospital, she was returned to ‘Pine Lodge’ the original home of her parents and long known for its bountiful hospitality; and this very active life sought a period of retrospect kept from friends by the very nature of her suffering. On Saturday, other complications developing, she was removed to the Hutchinson hospital there to await her earthly end. This came shortly after midnight on Monday night, the passing being peaceful. Of the family of nine Death had garnered two-thirds, and there left to mourn their loss – Mrs. Custance (Edith), (Melbourne) Ruby (Gawler) and Arthur (W.A). The remains were interred in the Willaston cemetery on Wednesday afternoon, when the coffin was borne to the grave by old friends of the family in Messrs. Arthur and Frank Taylor, Jas. Alexander and Perc. Potter. The burial service was read by Pastor T. Wellington, a short service being held at the home before the cortege set on its way.

No better epitaph could be written on this life than that penned by the late Mrs. Willett Bevan, on the death of Miss Barnet’s mother in 1921 –

Passed on. Her work left here for other hands!

Straight as a slender pine, her chin alift;

When God’s call came; but one nor wind nor wave

Could loosen from the quay – nor leakage find!

She knew the Master’s hand would guide aright

To where love waited her – beyond Death’s night.

and the photographs of her piano in the Gawler Institute].

Thankyou to Paul Barnet for supplying the following digitized "Modern Athens Cook Book 1927" - click below on either link..... 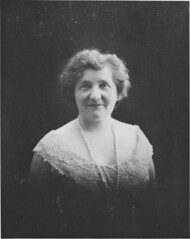 Town of Gawler Steinway being taken for restoration 5 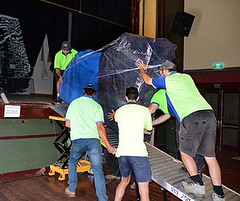 Town of Gawler Steinway being taken for restoration 1

Do you remember Barnet Florence ? Then Join up and add your memory here.