Named after his father, Henry Edward Bright junior was born March 16, 1843 at Chelmsford, Essex, England. His mother’s name was Jane Prudence (nee King). He came to South Australia with his parents as a boy in April, 1850, and the following year the family moved to Gawler. After spending some of his time as a border with Mr. Burton’s school, Henry went back to England in 1856 to complete his education at King Edward VI Grammar School, returning to Gawler in 1859.

On October 29, 1863, Mr. Bright married Harriet Garrood – who was also born at Chelmsford – in Gawler, and they had eight children. He took an active interest in municipal work, and served as a councillor for several years before filling the mayoral chair in 1879 and 1880. During his term of office the policy of street lighting was initiated, and he presented a lamp and pillar to the town.

A butcher by trade, Mr. Bright was the proprietor of a large business that had been established by his father. A member of the first Gawler Rifles, he was a prominent member of the Church of England, and was appointed the first returning officer for the Electoral District of Sturt. In 1888 he went to Broken Hill, and in 1895 was appointed a Justice of the Peace. 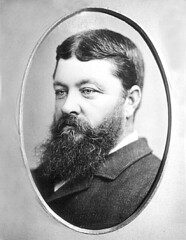 Do you remember Bright (Mayor) Henry Edward Jnr ? Then Join up and add your memory here.