George E. Loyau "The Gawler Handbook" [G.E.L.] p9 "The first house erected in Gawler was the "Old Spot", in Murray-Street, almost immediately opposite Whitelaw-place, at the corner of which the Post-Office now stands.......It was first erected by Mr. Scheibener, and afterwards occupied by Mr. Tooth ; but the days of its greatest prosperity were those when it was con-ducted by Mr. Henry Calton, whose public spirit in matters connected with the township is still cherished in the remembrance of all its old inhabitants."

E.H. Coombe, M.P. "History of Gawler" [E.H.C.] p14 "....there arrived Mr. Henry Calton, who proved himself an enterprising and public-spirited resident. The Old Spot was purchased by him, probably from Mr. Tooth, the second proprietor, who enlarged it. Mr. Calton made arrangements for carrying on a Post Office and for a stage coach - or spring cart - service between Gawler and Adelaide. This townsman used to read the service at burials in the old cemetery. He was mainly instrumental in the erection, in Schiebner-terrace, of a schoolroom which served as a meeting house for civic and religious services. Mr. Calton owned a large portion of Gawler. He sold to Mr. James Martin the land on which the Gawler Stores were erected, and which were afterwards carried on by Mr. Jas. Harris for many years. Mr. Calton was a veritable Poo-Bah. He went to the Victorian diggings in 1851, died there, and was buried in a bark coffin."

Derek Whitelock "Gawler" p229 "Post and Telegraph - Robert Robertson, owner of the Old Bushman Hotel, brought the mail from Adelaide and distributed it to the first settlers. In 1843, Henry Calton of the Old Spot organised the mail run and his tavern acted as post office until a postmaster was appointed in 1849."

[E.H.C.] p202 Loyal Gawler Lodge of Oddfellows, Manchester Unity, was founded on May 16, 1846. It was opened upon a dispensation from the Hope Lodge......there were initiated on the first night of meeting Bros. H. Calton, G. Telford, T.G. Round, S. Pope, C.H. Bell and C.C. Crace. Five out of the six severed their connection soon afterwards.....The opening ceremony took place in a room at the back of the Old Spot Hotel. The late Mr. H.Calton was the first Treasurer...."

[E.H.C.] p199 "Lodge of Fidelity, Freemasons - The first meeting preparatory to the formation of this lodge was held at the Old Spot Hotel on January 1, 1849. At this meeting there were present only seven members. They were Brothers David Mahoney, John Auld, Thos. Auld, W.P. Mackay, Wm. Debney, Henry Calton and Ed. Magnus......At the end of the first year's existence Bro. Calton was authorised to purchase three candlesticks and the necessary candles for the anniversary which was to be celebrated early in 1850. The Lodge removed its meeting from the Old Spot Hotel to the Globe in March, 1853. Henry Calton was Past Master of the Lodge of Fidelity 1851-2."

[G.E.L.] p11 "The public school-house, built on land set apart for the purpose at the junction of Schneibener and Fotheringham terraces, is a building of much humbler pretentions, but nevertheless has done, and still does, its share in the good work of progress. Not only was it used as a school in the early days of the township, but different denominations held their religious services till the congregations became sufficiently numerous to rear edifices for their own accommodation. Some time after its erection five trustees were appointed to keep it in proper repair.....Messrs Calton, Gozzard, Duffield, Auld, and Orsmond....It is at present worthily occupied by Mrs. Murphy as a school for young children."

[G.E.L.] p11 The Willaston Bridge "was swept away by a heavy flood in July 1847....Mr. Uren, the boatman, through the kindness of Mr. Calton, had placed his boat on the river, purposely to convey the Rev. Mr. Coombs to the sunday service at the old school-house; having done so, he was returning for others, when, by some mischance, he fell into the water and was carried away by the stream, and his heavy boots soon filling, he was, although a first class swimmer, dragged beneath the service and drowned...it was not m until seven days after that his body was found."

[G.E.L.] p15 "In 1846, when the town was only seven years old, a Lodge was opened in connection with the Manchester Unity of Oddfellows, and called the Loyal Gawler Lodge. This Lodge was opened at Host Calton's, at the Old Spot....was there until 1852, when it was removed to the Globe Inn, and afterwards to the Old Bushman."

[G.E.L.] p52 James Martin "left Cornwall, of which he is a native, in his 25th year, and arrived in Adelaide July 1st, 1847. He worked in the metropolis for eleven months, when he went to Gawler, and hired a blacksmith's shop from Mr. Henry Calton.

A.P. Harvey's book [ISBN 0 9588286 1 X] "I called it Salisbury" [a biography of John Harvey "The founder of Salisbury"] page 33 ...."Mr. Henry Calton purchased the "Old Spot Inn" at Gawler town, which then constituted of only two rooms, with stabling at the back, for use of travellers going north. After taking it over, Mr. Calton greatly extended the building, adding many gables, and I assisted with the laying of the foundation stone for the new "Old Spot Hotel". With his purchase, Mr. Calton was obliged, by the transaction, to register as a Postal Officer, which he did on the 31st of December 1842. One room of the hotel was taken as the Post Office, which served all of the northerly settlements at that time, and for the following year I became his assistant, picking up mail in Adelaide and delivering it by cart to Gawler town. The Adelaide Post Office was then situated on the corner of King William Road and North Terrace. I would pick up the mail and parcels there, then depart from Graham's "Victoria Hotel" in Hindley Street every Tuesday and Saturday at 11 o'clock, making the return trip from Gawler town every Monday and Friday. There was also seating for four passengers in the spring cart, and seat could be booked, at either Gawler town or Adelaide, for the fare of 7s 6d per person." Page 34 "One of the first passengers I took to Gawler Town on my mail cart was Larry Purcell, for whom I found employment with Mr. Thomas King, the first blacksmith in that town." 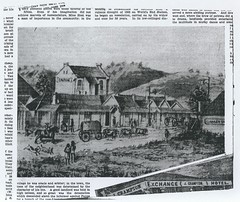 Do you remember Calton Henry ? Then Join up and add your memory here.