Clyde Cameron AO was educated at Gawler High School but left school to become a shearer at the age of 14. During the 1930s depression, he found it hard to find work, this period lit a fire in him that saw Cameron stand to represent the working man. An active member of the Australian Labor Party and Australian Workers Union, Cameron rose through the ranks to become an AWU organiser, then State President, and in 1941, Federal Vice-President of the AWU.

From 1943 until 1948, Cameron learned industrial law and stood as the AWU Industrial Advocate. From 1946, Cameron was South Australian State President of the Labor Party.

Cameron was a member of the Australian House of Representatives for 31 years from 1949 to 1980. He served as a cabinet minister in the Labor Party during the Whitlam Government.

Cameron was awarded the Centenary Medal in 2001.

An extract from Mungo MacCallum's obituary for Clyde Cameron.

CLYDE Cameron set one political record that is unlikely to be broken - not that anyone would want to break it. He sat in the House of Representatives for 31 years, and 28 of them were spent on the opposition benches.

He lived through two world wars as well as Australian deployments in Korea, Malaya and Vietnam and survived three Labor Party splits _ four if you count the defection of Joe Lyons to become a Nationalist prime minister.

It is hardly surprising that he earned a reputation as a bitter and vindictive politician. What is more remarkable is that he had a brief, positive renaissance under Gough Whitlam during which he realised many of his long-term ambitions before, once again, it all ended in acrimony.

For about five years, from 1969 until 1975, the two men travelled in lockstep, the firmest of allies _ so much so that after the successful election on December 2, 1972, Whitlam gave his colleague a photograph inscribed, with genuine gratitude, “To Clyde, a principal architect of victory”.

During this period the two men made one of the oddest of political couples ever seen _ even within the ALP, always a party of strange and unlikely coalitions.

Whitlam, the urbane Sydney lawyer, a natural politician of the right, classically educated and well-connected, always prepared to negotiate a path through any obstacles between himself and political victory; a man of high intellect and high ideals, but one who always acknowledged the need for pragmatism.

Compare and contrast, as Whitlam himself often put it, Cameron, a lifelong lefty who had left school at 15 to go shearing, whose politics were forged in bitter and uncompromising disputes within the Australian Workers Union, who never forgave his enemies and saw every contest as a personal challenge to be won by any means available, irrespective of legality or ethics.

What drew him to Whitlam was the shining possibility of finally achieving office.

In every sense _ class, ideology, political backers _ Whitlam was Cameron's natural enemy. But he offered the only hope of Cameron achieving his dream: to become minister for labour and industrial relations.

At the beginning of 1969 Whitlam put it to him as a stark choice: if he joined the bandwagon for reform of the party structure which was needed to persuade the voters that Labor was electable, he could have his heart's desire. The alternative was to grow old in opposition. Cameron went for the gold.

But it was all to end in acrimony, for which he never forgave Whitlam. 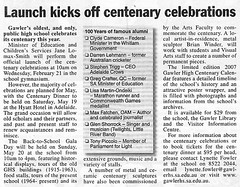 Do you remember Cameron Clyde ? Then Join up and add your memory here.