“Church Hill” is specifically designated and generally defined within:


Eastern side of Light Square


Jacob Street North side to Porter and Finniss Sts corner


The following are extracts taken from Hignett and Co Gawler Pilot Heritage Study 7th October 1988 and the report to Town of Gawler by Taylor Weidenhofer in 1998.

“Gawler was a speculative venture by 12 landholders in a special survey beside the North Para River. Col William Light was employed in 1839 to select the site and design the town.”

“The Church Hill State Heritage area is the core of the area selected by Col. Light.”

“Church Hill is an area established on a natural spur of land above the river flats which surround it. The natural topography provides a dominance to the area which was recognised by Light and Finniss in the original survey prepared for Gawler.”

“Col. William Light, as a member of the surveying team Light Finniss and Company (a Company created a day after Light’s resignation from the position of Surveyor General on 3 July 1838), is said to have planned the township of Gawler in the early months of 1839. It is the only country township he is said to have planned although he was asked to plan many and refused all, but Gawler. The town became the model for other South Australian townships with its grid pattern of streets, city squares, and belt of parklands surrounding the township.”

“Although Light was very ill at the time (with the disease that would eventually kill him in late 1839) he is said to have been the creative force behind the plan which was drawn by R. G. Thomas (draughtsman) and laid out by the firm’s surveyors, William Jacob and Henry Nixon.”

“The Special Survey and later the township was named after Governor Gawler.’

Please click here to read an article regarding the historic Church Hill tennis courts as printed in the Bunyip newspaper 8 September 2021. 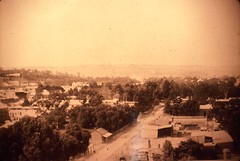 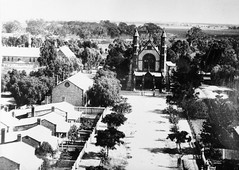 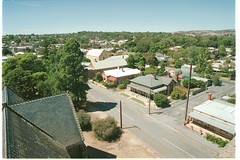 Do you remember Church Hill ? Then Join up and add your memory here.