Edward Clement was born in Boston, Lincolnshire, England on July 19, 1823 to Edward Gottlieb and Hannah Clement. Edward arrived in South Australia in 1854, and came to Gawler two years later. Initially an auctioneer in the town, he subsequently became a chaff produce merchant. Edward's first wife, Sarah Woodward, "was borne of Christian resignations" but died 16th November 1866 at age 35 after "a severe affliction" and was one of the first interments at the Willaston Cemetery. Three years later he married Julia Weaver of St. Marys, and they had eight children.

His home was situated on the corner of Jacob and Reid Streets and in c1872 he planted the tree which eventually became Gawler's Christmas Tree, and used as such until it was cut down in c2002.

Clement owned one of the two omnibuses that commenced running between Gawler and the railway station in 1865; the old Celerity. Also, in 1864, with Mr. James Martin, Edward was appointed trustee for “the purpose of conveying certain lands donated by the proprietors of the Gawler Special Survey”.

A councillor through the 1860's, and Mayor in 1869 and 1870, Edward moved to Adelaide in 1889 and conducted business there, after he and his wife received a public farewell and presentation from the citizens of Gawler. Also a Justice of the Peace and hotellier, Mr. Clement died at Parkside on October 19, 1908, and is buried in West Terrace Cemetery in Adelaide.

According to David Taplin in his address to Gawler History Team 10/2019 re Tod Street Methodist Church, he said "In August 1867 building work began with the formal laying of foundation stone at the south-east corner with considerable ceremony. The stone was a large slab of slate from the quarry of Mr Clement who donated the general building stone as well."

GHT members believe that his quarry was situated in the hill abutting Mount Terrace, Gawler South, behind where the "Snowy" Miller slaughter yards were situated.

click here to see the Christmas tree on his property 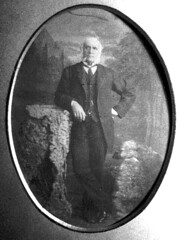 Do you remember Clement (Mayor) Edward ? Then Join up and add your memory here.