In the years prior to Stan's death, Brian Thom videoed 3 hours of his interview with Stan. Much of the history of the district of Gawler Blocks was unearthed. That interview was made into book form and the family were presented with the book on the occasion of the opening of the new Evanston Gardens Hall (adjoining the old Gawler Blocks Hall) and the hall entry area was named after Stan and Rose Coles who did so much for the Gawler Blocks area and the Hall in particular. I have a copy of that book which was returned to me from Gawler Council after they expressed some concerns about the existence of some sentences contained therein. (Stan always "called spade a spade" and was somewhat blunt in his choice of words relating to some people.)

STANROSE Way in Evanston South now exists in the Gawler Council area and was named to honour Stan and Rose Coles. (The name got passed by Council with little enquiry at the time as to where the name Stanrose originated or who Mr or Mrs Stanrose was.) As a Councillor, I chose not to raise the issue at the time, as I had no qualms or disagreement that someone put forward that proposed street name. Brian Thom 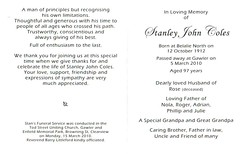 Do you remember Coles Stanley (Stan) John ? Then Join up and add your memory here.