But of the season’s scheduled games, two were abandoned and rescheduled for after the September 16 match. Both contests were South versus Willaston, played on the following two Saturdays. With the season extended to incorporate these two additional games, it’s possible a play-off would have interfered with the players’ cricket commitments and may have contributed to South declining the opportunity to meet Central. The Bunyip report of October 6, 1893, stated: “The South Gawler's have declined to play off with the Centrals for the Gawler Association Premiership. The two clubs, therefore, tie for the position. This is very unsatisfactory.”

And as further evidence of the fact, the 1893 premiership was shared between Central and South, the Gawler Football Association’s annual report was published in The Bunyip on April 20, 1894. It stated: “Last season was a successful one both from a football and financial point of view. The season ended unsatisfactorily so far as the premiership was concerned. The South Gawler's and Centrals tied for the top place, and for some reason or other, the playoff did not take place. It was hoped that such a state of affairs would not be possible in the future, and it was suggested that the club refusing to play off on another occasion should take second place.”

Of the discovery, South Gawler president Jim Callander said: “Even though it’s 100 plus years later, we’ll take it. Every premiership is valuable, particularly as we, unfortunately, finished wooden spooners last season. It gives us a little to smile about,” he said. “Although South hasn’t won a premiership for a while, with 36 flags, now 37, we are the most successful football club in South Australia, and third in Australia.” 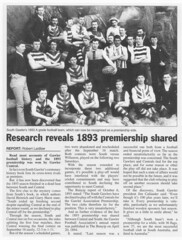 Do you remember Football - 1893 Football Premiership ? Then Join up and add your memory here.