The Gawler Broadcasting Association is an organisation dedicated to giving the people of Gawler a voice, whether through radio programs, local art and music, or short films.

This has been another fantastic year for the Gawler Broadcasting Association. In several ways, it has been our most successful year so far. A wide variety of new shows have been added to our rotation, our website traffic has increased once again, we’ve gotten some projects and events up and running, and the Gawler Oral History Group has been successful in their own right. We’ve even won a few “Bilby Awards” from the South Australian Community Broadcasting Association! Comparing our year thus far to the same period last year, we’re up in users visiting the website an additional ~60%, which has continued to steadily improve itself year on year since we were founded. Our traffic has also been steadier over the past few months thanks to the gradual build-up of content onto the website. Alongside our podcasts, we have been gearing up other forms of regular activity on the website, with our news coverage starting to pick back up and some fantastic interviews from the Oral History group. In fact, one Oral History interview was so good that it won an award. Barry Neylon’s interview with Raelene Benier won runner-up in “Best Interview”, while the History group also won an award for “Community Engagement” thanks to an event they co-hosted with the Gawler Car Club. A third award was won by Lisa Simmons for her “Miscellany Podcast”. We competed with every community radio organisation in the state for those awards, including big stations like Radio Adelaide, so these wins have really helped our confidence as a group that we are producing some top-class content and innovating meaningfully in the community broadcasting space. I’d like to give a big thank you to all the volunteers who made this year’s success possible, both within and outside of the board. In the first year of our founding, one major concern that we discussed was that we could only sustain ourselves in the long term if we created a culture where a large number of people could have a role and get involved rather than the work resting on the shoulders of a passionate few board members who might burn out in a year or two if too much pressure was placed on them, and I really think we’ve started to see the fruits of our efforts in that regard. Some notable non-board volunteers this year include several of our content creators, as well as the creators over at the Oral History Group, and people like Gerri Donaldson whose running of our annual Quiz Night continues to be a highlight of the year. It has been more than four years now since GBA was created and I was elected as its founding chair. I plan to continue my volunteering with GBA which I have a lot of attachment to, but I will be stepping down as Chair, both because new challenges such as my election to the Gawler Council will be taking much of my attention over this next year, and because I believe that people with different strengths can only help the organisation to grow in new and important areas. We’ve done a lot of great work in these past few years, so let’s use these solid foundations we’ve built to continue to expand our reach in new and creative ways.

This year has seen steady growth for the Gawler Broadcasting Association, in all aspects of the organisation. This time last year we reported that we had seen more than 10,000 page views for the year, and since the last AGM we’ve seen growth of almost 60% in that area, as well as improvements across the site, including people spending on average 20% longer on the website during each visit. Our content has also become more diverse, seeing a large increase in the number of unique content creators who’ve contributed to us, including a some fantastic work from our Oral History project, which this year launched a page on the site to host their interviews. We were thankful this year to have been able to get to know local resident George Lucas, who participated in an interview with his wife Shirley Lucas, before his passing this year. Recording voices and stories like his is important work and I hope we can continue to be a resource to the Gawler community into the future. We managed to receive another award from the South Australian Community Broadcasting Association this year, who gave our own Maddy Kennewell a runner up trophy for Youth Contribution in community broadcasting. Overall, the GBA is doing very well for itself, and I can’t wait to see how it continues to grow in the future.

This has been a big year for Gawler Broadcasting. This time last year at our AGM we officially launched our website, with only seven episodes to start off with. Now, between our regular podcasts and our local news and event coverage we’ve posted more than 100 new pieces of content to the website. According to Google Analytics, in this past year the website has received more than 10,000 unique page views, and with our growing presence in the community and on social media, I believe it is only going to grow massively from here. This has been a big year of expanding horizons for us, as we discover just much is possible when we explore online media. Not only have we produced some great podcasts, but we have several other fascinating projects currently going on, like our oral history project, which is currently being spearheaded by our own Barry Neylon. It’s about uncovering the stories of local inhabitants of Gawler so that they can be preserved forever, which the Gawler History Team has been very excited to help us out with. We’ve been getting noticed too! We received an award this year from The South Australian Community Broadcasting Association, with our treasurer Angus winning an award from youth contribution in South Australian Broadcasting, amongst a range of submissions from community radio stations all around SA. On another note, we are sad to hear of the passing of Philip Tow this week, who helped us with our policies in the early days of GBA. Overall, we are headed on a great path right now towards something amazing, and I’m proud of everyone who has helped us out along the way so far. I truly believe that we have the potential to be something incredible, something that will be presented all across the world as a template for how local communities should preserve and enhance their local culture going forward in this digital future. I hope you are all as excited as I am about the possibilities we have in front of us. Let’s work together to make them a reality. 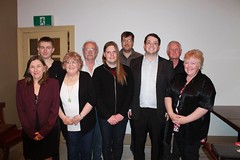 Do you remember Gawler Broadcasting Association ? Then Join up and add your memory here.