The Gawler A, H & F Society was first established in 1856, as the central point of a large agricultural district where the town’s people sought the opportunity to meet, celebrate and trade. The first “Show” highlighted the crop, sheep and other pastoral strengths associated with the region. The inaugural committee were highly regarded people in Gawler; several were local councillors and could see the merit of bringing a large festival to this region. Since this time the Gawler A, H & F Society has grown in size and popularity.

While the Gawler Show is still about the variety of competitions based on Agriculture, Horticulture and Floriculture, it has also grown and adapted to continue to suit the requirements of people from all over the district. As the township of Gawler grew, its focus on agricultural pursuits has changed and the current Gawler Show goes to great lengths to incorporate educational elements to ensure the history and integrity of Agricultural Shows does not cease to exist.

The key aim was to host a community event; this is still the paramount aim today. As a volunteer not for profit Society, we are blessed with the good nature of hundreds of people from around the district who donate their time, ability and passion to assist with hosting South Australia’s largest country show. To enable this success we recruit many of the other local organisations and clubs to assist us in the lead up to and running of the event. These organisations benefit in return from a variety of incentives such as: financial remuneration by donation, marketing opportunities by being seen as being involved and in the overall good spirit that is shared by so many.

Today’s annual Gawler Show is Gawler’s key tourism event and boasts of 6,500 entries in the 27 different competition sections, over 300 trade sites, 30 Catering opportunities and entertainment from local, national and international backgrounds. Rolled into a full weekend of fun and entertainment, the Gawler Show proudly sees an estimated gate attendance of 30,000 people and continues to go from strength to strength guided by a dedicated volunteer army of people displaying the great attributes of country life and living.

This has been the 159th Gawler Show that has been held.

Attended by Hon John Dawkins MLC, Member for Wakefield Nick Champion, Opposition Leader Stephen Marshall, Stephan Knoll Member for Schubert, Janet Done on behalf of Minister Tony Piccolo MP the Member for Light, and our major sponsor Foodland Gawler, the show was opened by the Chairperson Steve Frinsdorf and the Mayor of the Town of Gawler Karen Redman.

The show was attended by many distinguished guests and sponsors; supported by Past Presidents, Gawler Show Management team, volunteers and the youth committee.

Few people would deny that in 2015 it was difficult to raise sponsorship. The Northern Gawler Region is being challenged like never before with the loss of Holdens. It is a massive blow for the region, and for its workers and the broader community. This year has been a year of many changes but, with the help of our board with its fantastic leadership skills, knowledge and experience, we were able to weather the storm.

We have employed a new Show secretary Kate Cowell, who has been pivotal in bringing this all together, supported by her administration team.

Some entries were down in handicrafts, but the beer and olive oil was up; showcasing the best of the Gawler Region. The new fantastic greyhound building was well supported with the public and the highlights were the fireworks on the Saturday night. As usual, the horses are a main drawcard, with their chance to qualify for FIA standard.

We thank our major sponsor Gawler Drakes Foodland and all our long-term sponsors who provide support and prizes and to all the sponsors; like wine from Virgara Winery at Angle Vale, Brereton Jewellers, and Gawler Fasta Pasta etc. We also thank the Town of Gawler for its long-term support over the years, for the use of the site and in-kind financial support; the years of support given by Bob and Marg Ahrens for the steam model displays; and the judges and convenors for their tireless time spent in managing the event. We have had in-kind support from the Bunyip newspaper and Channel 7, and Radio Nova Five AA has been spreading the word. Technology is changing, with many people looking at our site on Facebook.

The Board has started the process of updating our constitution and had a new member join the Board; an exciting new era indeed. This was a year of many changes in the Management structure of the show. All committee members stepped up and gave 100% and with the support of the old members, it was hard to beat.

Many of the life members may not come on the day but still put up prizes, and it has been great meeting up with many at the Show Office.

We also trialled a trailer mounted direction for parking, as well as installing traffic monitoring crowd control. We had an onsite safety officer maintain our risk management.

The usual crowd pleaser, the animal nursery, and the Treasure Trail were well used. Another feature was more music on the ground, as well in the Youth Shack. Many tried the adventure of the bucking bull. The choice of food was staggering and with the larger tents, we had all sites in use. We are thrilled to have a great number of entries in many classes, as well as the horses at such a high level. The family tradition of showing cakes and scones using Laucke flour is alive and expanding.

Julianne Grillet is thanked for again producing the Gawler Show Book to be out on time. Xavier College students are thanked for their input in designing the front cover.

Patricia Dent OAM conducted the Rural Ambassadors Programme and set up the Greyhounds building for the Show lunch, and it was great to see we have continued interest in promoting Agriculture in our region.

Dean & Dot Knoll shone as the troopers they are. Jim Downer and his wife Gaye kept an eye on the finances and the parking. Sigrid Murljacic was in charge of trade sites, and Chantelle Tesselaar, the music. We thank Sheree Woithe for her team of indoor judges. Julie Martin gave outstanding leadership in the animal nursery and Angela Nemeth must be thanked for her intervention in lifting the profile of the goats and poultry.

Further thanks go to Di Birmingham for her control of the horse rings, Aaron for many hours onsite time managing the team and communications, Aaron Cowell for site management and forklift skills, and the Willo’s Men’s shed and Probus members gave us great support.

A very sad and special mention must be made to Graham “Kanga” Parham who fought hard to be at the Show, but it was not to be. He made his mark on Horse judging at an Olympic standard at the Gawler Show over many years. His legacy will live on and he will always be remembered for his achievements and we are deeply saddened to hear of his passing.

All in all, another great year for Gawler Show and the pivotal role it plays in showcasing the region. It was a great opportunity to meet old friends. We had over 220 Judges and Convenor’s and up to a further 80 from Service Clubs who support our car parking endeavours. We look forward to working together to create the 160th Gawler Show - all run by Volunteers who support Gawler.

The following links are kindly digitized by Paul Barnet - Gawler Show Ledger 1870 - The first is a compressed version of the larger second link. 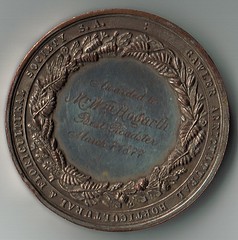 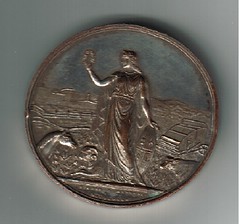 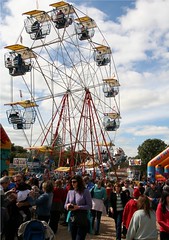 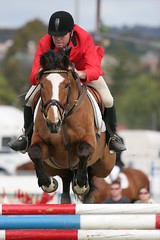 Do you remember Gawler Show Society ? Then Join up and add your memory here.